Serve a fresh, spicy, and tangy bowl with some tortilla chips or crispy tostadas.

Aguachile is a tasty snack that's easy to make and full of fresh Mexican flavors. Try making a meat-free version to see what all the fuss is about.

Although you may think of Mexico when the word ceviche comes up, it actually comes from Peru. On the other hand, aguachile (which translates to "chile water") is an authentically Mexican recipe.

A typical aguachile verde recipe is made by tossing raw shrimp in a mixture of serrano chiles, lime juice, onion, and cilantro.

Once the shrimp has marinated, slices of cucumber and red onion are added to the mix before serving. While there are a lot of similarities to ceviche, let's see if we can set the record straight on how they are different.

In a ceviche recipe, the seafood is left to marinate in lime juice for at least 20 minutes, but upwards of a few hours. For aguachile verde, the shrimp are tossed in a marinade full chiles, lime, and cilantro and served rather quickly.

Aguachile is served in a bowl with more of a soupy broth, and it packs a lot of heat in comparison to ceviche (usually just citrus-based).

Because aguachile recipes are typically made from shrimp, this is not a vegan (or vegetarian) dish. The fresh flavors behind this traditional Mexican dish are too delicious not to make plant-based, so we thought why not do the same thing with mushrooms?

The flavor and texture of oyster mushrooms make the perfect replacement for shrimp. But if you don't like mushrooms, you can also try ingredients like canned artichoke hearts, jackfruit, or heart of palm for delicious variations.

Aguachile has taken various forms throughout history, but the most recent can be traced back to the coastal state of Sinaloa — more specifically Mazatlán.

Seafood was not always the featured ingredient in aguachile. In fact, it was a form of food preparation more than anything else.

Indigenous communities inhabiting mountainous regions would journey to the coastline in order to trade their meats for salt. During their trips, they would apparently serve jerky in a chile-infused water marinade (aguachile).

This means of using chile water as a marinade spread to other parts of the country and seafood soon entered the equation.

Although you can serve this vegan aguachile recipe immediately after making it, the mushroom texture will become much more tender if you leave it for a little while.

Eat your aguachile with tostadas or tortilla chips to add more texture to this dish. And don't forget a garnish of avocado, more cilantro, serranos, or lime juice!

An ice-cold chelada pairs well with aguachile, but you can also chase it down with a flavor-intense drink like a mangonada or a cantarito.

Taste: oyster mushrooms have quite a meaty texture, and they're often described as carrying a seafood flavor. That's what makes them such a perfect option to emulate shrimp in this aguachile recipe.

Health: serrano peppers are high in vitamin A (which is good for your eyes) and vitamin C (which is healthy for your skin). These peppers also contain vitamin B6 (pyridoxine) which has been shown to help prevent clogged arteries.

Fun fact: lime juice is actually used in ceviche and aguachile recipes to denature proteins and kill harmful bacteria found in seafood. But, no need to worry about that when you're using mushrooms!

Taste: it's hard to imagine serrano and lime juice without the herbaceous flavors of cilantro. Used extensively in Mexican cooking, cilantro adds a fresh, almost spicy flavor profile to the marinade.

Health: surprisingly, cilantro has been studied for its unique ability to reduce pain and inflammation. In one study, they found a significant reduction in migraine headaches with coriander consumption.

If you have questions about this aguachile verde recipe, don't forget to check out our FAQ section at the bottom of this post.

Step 1: shred the mushrooms into small strips and add them to a mixing bowl with lime juice, salt, and pepper. Cover and let them marinate for ~30 minutes (the longer the better).

Step 2: in the meantime, blend the serrano peppers with cilantro, garlic, onion, lime juice, vinegar, and salt (and cucumber seeds if you'd like).

Step 3: pour the mixture over the mushrooms and stir to coat evenly. Cover again and let marinate for another 30-45 minutes.

Step 4: peel the cucumber, cut it lengthwise, and seed it. Slice the cucumber into crescent moon shapes and thinly slice the red onion. Mix both into the bowl of shredded mushrooms.

Step 5: transfer everything to a serving dish and drizzle a little olive oil on top. Serve this mushroom aguachile recipe with tortilla chips (totopos) or on tostadas with avocado and more cilantro on top. Happy eating!

If you don't make it all the way through all your aguachile recipe, these storage tips might come in handy.

Vegan aguachile will keep in your fridge for up to 2 days. We find it's best consumed on the first day, but if stored in airtight glass containers, you should get about another day out of the recipe.

We'd like to share some tips and variations we learned while experimenting with this vegan aguachile verde recipe:

The next time you're craving an ice-cold cerveza, think about pairing it with this vegan aguachile verde! It's:

If you try this aguachile recipe, please rate it and leave us a comment below! Want to stay up-to-date with new recipes? Subscribe to our newsletter or connect with Broke Bank Vegan on social media. Happy eating! 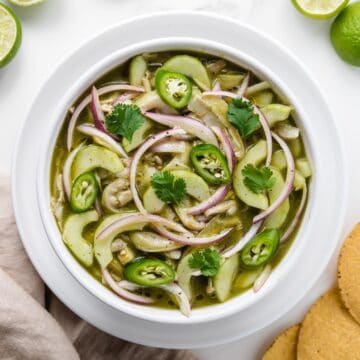 For more tasty plant-based Mexican snacks, check out our:

Do I have to drain the marinade before eating?

No! This dish is meant to be served with the marinade. It's soupier in comparison to ceviche.

Can I replace the lime juice with something cheaper?

The marinade is supposed to be very tangy, so it's best to use the measurements we've set out. If you want a cheaper option, try replacing some of the lime juice with more vinegar.

Do I have to marinate for one hour?

No, you don't have to marinate for that long. But, the more the mushrooms sit in the sauce, the more tender they will become. It's totally up to you though!