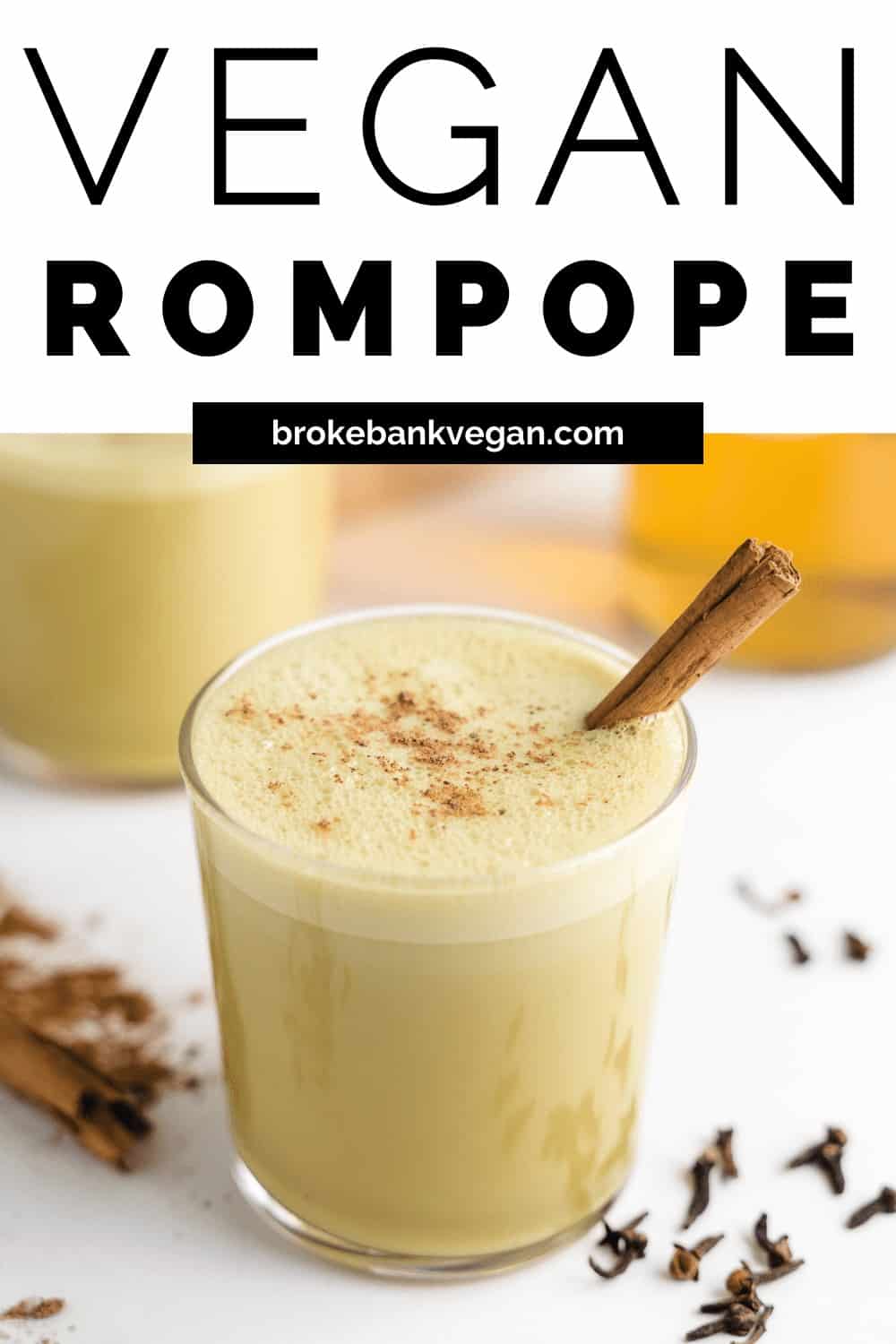 Try this smooth and creamy rompope recipe for an egg and dairy-free take on the original. Plant-based milk is thickened with cornstarch and combined with spices like cinnamon, clove, and nutmeg for a drink that can be enjoyed warm or cold!

Much like eggnog, rompope is a delicious drink to enjoy during the holidays. If you're looking for a recipe to share with your family and friends, try adding a little Mexican flair to your festivities this year!

It's meant to be served chilled over ice or warm — it's all up to the individual.

Although rompope can be made year-round (which we totally condone), you'll typically see it more around Christmas time in Mexico.

If you've ever tried making your own eggnog, you'll know how much better it is than store-bought. And it's no different with rompope!

Oh, and we almost forgot to mention the best part! You can spike your rompope with rum (or other spirits) to give you the necessary courage for making it through the holidays with your family.

Rompope and eggnog only have a few minor differences. Eggnog uses both egg yolks and whites while rompope only uses the yolks. And rompope also contains the addition of slivered almonds, lending a nutty flavor and creamy texture.

Since there are egg yolks and milk in rompope, a traditional recipe is unfortunately not vegan.

To emulate the texture, umami flavor, and color that egg yolks provide, we incorporated a combination of turmeric, nutritional yeast, and corn starch.

We also swapped out the cow's milk for soy (or coconut) milk, making this recipe suitable for all dietary preferences!

The convent of Santa Clara in Puebla, Mexico has been credited for the creation of rompope. More specifically, a nun there (Sister Eduviges) is said to be the mastermind behind it all.

The original recipe was apparently inspired by a Spanish drink, ponche de huevo, or egg punch. But, Sister Eduviges added in a few twists of her own — one ingredient still remains a secret to this day.

When officials from the Catholic Church eventually stumbled upon her creamy and rum-filled drink, Sister Eduviges made certain the nuns would still be able to try their finished product (rum and all).

And from there, this festive drink has made its way into many Latin American countries. There are of course slight differences in names and ingredients, but it's all thanks to the nuns of Santa Clara.

Just like eggnog, Mexican eggnog can be served cold or warm, with or without alcohol. Some of the more popular spirits to add include dark rum, brandy, or whiskey.

We bet it would also taste incredible with vegan Bailey's added to the mix.

Rompope makes a supportive sidekick to crispy Mexican desserts like:

So the only question is... Are you team hot or cold?

Taste: to replace the rich, full flavors of whole milk typically found in rompope, we suggest either soy or coconut milk. But, feel free to use whichever variety is your favorite! They are all delicious.

Health: ditching dairy not only helps animal welfare, but it also improves your health! Fortified soy milk contains omega-3 fatty acids, which are very beneficial for our brains. On top of that, there are 7 grams of protein in just a single cup serving!

Taste: offering little in the way of taste, cornstarch is actually here for something else! To replicate the quintessential color and texture of egg yolks in rompope, use a combination of corn starch (for consistency), turmeric (for color), and nutritional yeast (for flavor).

Fun fact: cornstarch was invented in 1842 by a man named Thomas Kingsford, but not for culinary purposes. It was originally intended for use in laundering clothes.

Taste: opening a jar of nutmeg is like opening a jar of the holidays! It’s warming, woody, and sweet — just what your drink needs. A little goes a long way, so you don’t need too much of this aromatic spice to really round out the flavors.

Health: nutmeg, also known as myristica fragrans, contains a compound called myristicin. When consumed in larger quantities, it may exude an effect on your nervous system. Don’t worry though, you’d have to eat a lot more than what’s included in this recipe for that to happen.

Taste: one of the ingredients that make rompope different from eggnog is almonds! They add a nutty, creamy, and tasty addition to this drink along with many health benefits.

Health: filled with protein, fiber, vitamin E, magnesium, and manganese it's no wonder almonds are touted as such a healthy food. Almonds have even been shown to help with blood sugar regulation!

If you have questions about this vegan rompope recipe, don't forget to check out our FAQ section at the bottom of this post.

Step 1: in a small container, combine the corn starch with a few tablespoons of plant milk until smooth. Add this mixture along with the rest of the milk, sugar, vanilla, and spices to a saucepan.

Step 2: bring it to a simmer until it starts to thicken slightly. Turn the heat off and leave the saucepan for another 10 minutes, then strain the mixture into a blender. Add the almonds in and mix on high until smooth.

Step 3: add the mixture back to your saucepan with the rum and heat over medium-low until warm. If you'd like it chilled, transfer the rompope to your fridge for an hour or so.

Step 4: mix rum (or whichever alcohol you're using) into the whole recipe or serve it on an individual basis. Garnish each drink with a sprinkle of nutmeg and a cinnamon stick. Happy drinking!

The best part about romope is that you can drink it warm or cold. Follow these storage instructions for the best flavors.

Vegan rompope will last in the fridge for up to 3-4 days. We recommend using glass mason jars to keep a more consistent flavor. This rompope recipe will thicken the longer it stays in your fridge, so make sure to give it a good stir or add more plant milk before serving.

If you'd like to drink your rompope warm again, transfer it to a pot over medium-low and heat it for 2-3 minutes until it reaches your preferred temperature.

We'd like to share some tips and variations we learned while experimenting with this plant-based version of rompope:

Try making this egg and dairy-free version of rompope to impress your friends and family during the holiday season. It's:

If you try this rompope recipe, please rate it and leave us a comment below! Want to stay up-to-date with new recipes? Subscribe to our newsletter or connect with Broke Bank Vegan on social media. Happy eating! 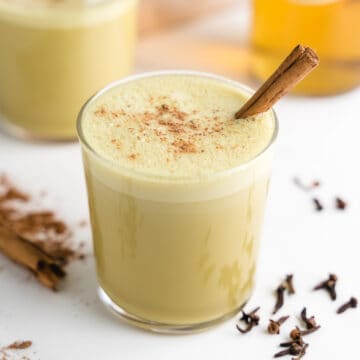 For more creamy (dairy-free) drink recipes, check out our:

Is this rompope recipe very sweet?

This recipe is quite sweet (as are traditional rompope recipes). If you're not a fan of sweet drinks, we suggest using half the amount of sugar called for.

Can I use powdered cinnamon in this rompope recipe?

Although we prefer the gentle infusion of cinnamon sticks in this rompope recipe, you can absolutely use powdered cinnamon instead. To replace half a cinnamon stick, start with ¼ teaspoon of the powdered spice.

Can I use any type of plant milk in this recipe?

Yes, you can of course use any type of plant milk in this vegan rompope recipe! We prefer using soy or coconut since they are both quite rich. But, almond or cashew are also great options.