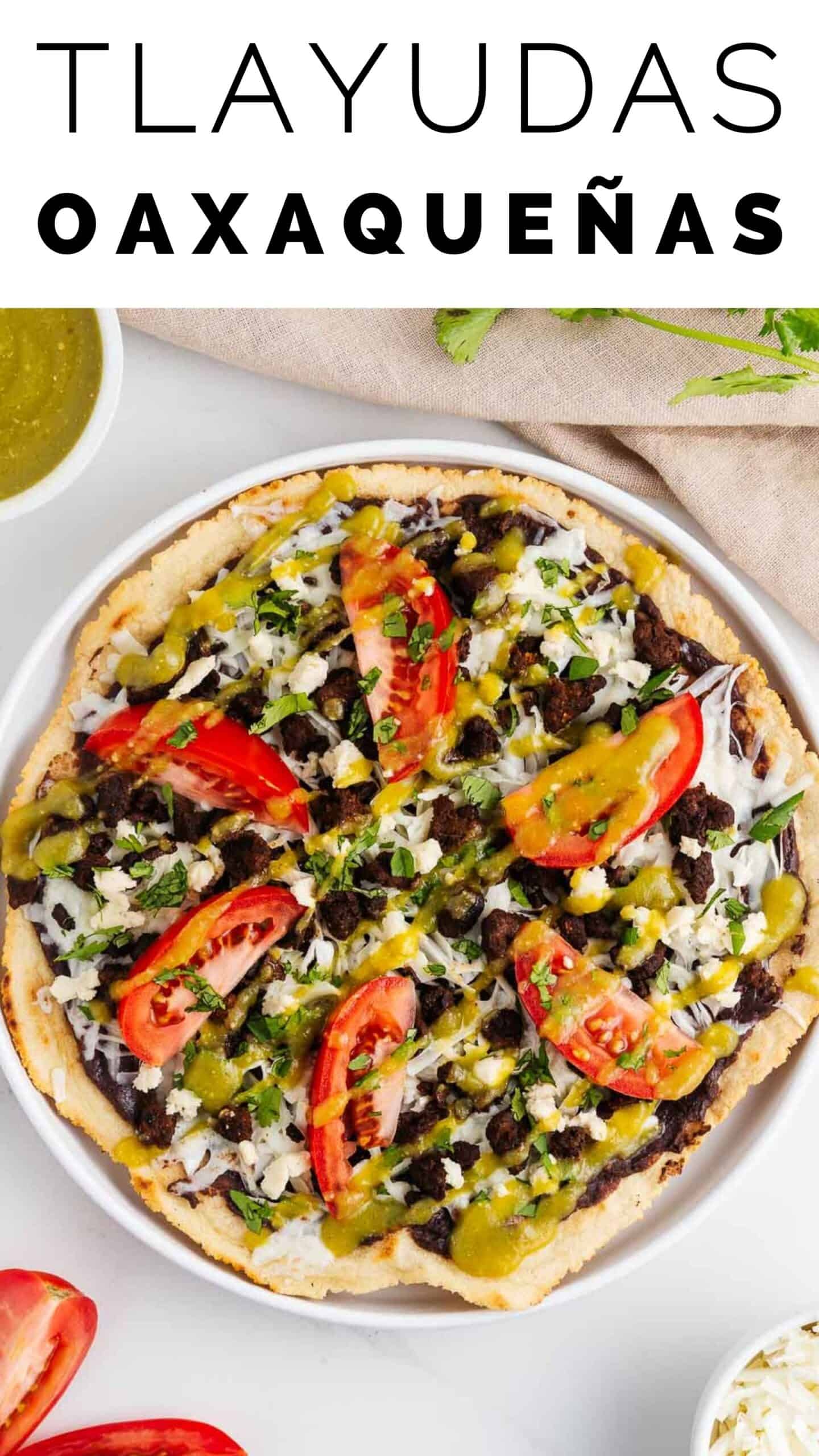 Tlayudas Oaxaqueñas come from the state of Oaxaca and begin with large corn tortilla bases and creamy refried beans. Finish yours off with toppings like vegan chorizo, melty cheese, cabbage, and tomatoes for the ultimate feast.

Make-it-your-own meals are our favorite type, and that's why we love tlayudas so much. You get to choose all your favorite ingredients and create an incredible dish that's perfect for lunch, dinner, and leftovers!

If you love Mexican food and history, you've most likely heard of the state of Oaxaca. It is internationally recognized for its unique cuisine, and the region holds a long-standing historical significance.

One of the most iconic dishes found in this state is called tlayudas Oaxaqueñas, or Oaxacan-style tlayudas. It's also sometimes referred to as Mexican pizza or Oaxaca-style pizza (but those names don't really it justice).

A tlayuda consists of a large (around 16") tortilla that's flattened and cooked on a comal, layered with asiento (lard), then refried beans.

And that's just the base!

Although there are common toppings for Tlayudas Oaxaqueñas, the rules are more like guidelines as many restaurants and street vendors create their own variations.

You can even find some served with chapulines (grasshoppers) on them, which is a Oaxacan specialty. Once cooked, tlayudas can be served open-face like a pizza or folded in half like a calzone.

Unfortunately, there are many components of tlayudas Oaxaqueñas that are non-vegan, which is why we set out to make a plant-based alternative.

Instead of lard, use refined coconut oil or vegetable shortening. Skip the dairy-based cheese and try vegan mozzarella and queso fresco instead. And opt for vegan chorizo for the protein topping.

With these easy substitutions, you can still enjoy a traditional dish without the need for animal products. We think that's pretty awesome.

There is a long and complex food history stemming from the state of Oaxaca, and tlayudas are just one of many incredible dishes there.

Several communities in Oaxaca's Central Valley are actually dedicated to preparing tlayudas. In San Antonio de la Cal, for example, a large portion of the economy relies on factories that sell them.

Although tlayudas are an iconic Oaxacan dish, they're also popular in places like Mexico City, Guadalajara, and Puebla.

Our hope is to share this incredible cuisine through a plant-based lens so more people are able to participate in the flavors, textures, and rich history.

Serve your tlayudas right off the comal (or skillet) because they're best enjoyed hot. Although there is a certain set of ingredients in this recipe, don't feel limited! Some delicious ideas include:

Whichever toppings you choose to use, just remember this recipe is vegan and gluten-free!

What it is: masa harina is a type of flour made from nixtamalized corn. Simply put, the corn is soaked in a special solution so certain vitamins (like niacin) become easier to absorb. This flour needs only water to become soft and pliable for recipes like corn tortillas (or in this case, tlayudas).

Taste: masa harina gives tlayudas the fresh corn flavor that's beloved in so many Mexican dishes. Tlayudas are cooked to form a firm and slightly crispy base — similar to a thin crust pizza shell, but with corn.

Health: masa harina is naturally gluten-free, and it's full of nutrients like B vitamins, zinc, and magnesium. Plus, tlayudas are much lower in calories when compared to a traditional wheat-based pizza shell.

Where to buy: you can find masa harina in large grocery stores, specifically in the international aisles. You may also live near a Latin or Mexican market, which will definitely carry some. And if you're still having no luck, try purchasing your masa harina online.

For more information, check out our detailed guide on masa harina.

Taste: creamy, garlicky, and smooth, refried black beans are the perfect base to use on your tlayudas. You can also use bayo or pinto, but the more common choice is black beans.

Health: beans are an ingredient powerhouse that sometimes flies under the radar. But with 15 grams of protein and 15 grams of fiber in one single cup, you can see why we love eating them so much.

Taste: spicy, herbaceous, and savoury, our protein of choice in this recipe is vegan chorizo. It's "meaty" and emulates the traditional flavors of Mexican chorizo. As we like to say... No meat, no problem!

Health: because there are no saturated animal fats in this version of chorizo, it's a healthier alternative for anyone wanting to cut down on their meat consumption. Plus, there are over 12 grams of protein in just one cup!

Taste: to add a melty, fresh, and slightly tangy flavor, we use vegan mozzarella as a close substitute for Oaxaca cheese. We also topped ours with a soft and creamy queso fresco, but it's totally optional.

Health: one reason we love eating dairy-free is to cut down on saturated fat intake. Unhealthy animal fats are swapped out for healthy monounsaturated fats found in nuts like cashews. This type of fat is actually heart-healthy because it helps lower your LDL (bad cholesterol).

If you have questions about this vegan Tlayudas Oaxaqueñas recipe, don't forget to check out our FAQ section at the bottom of this post.

Step 1: add the masa harina and salt to a mixing bowl and combine. Then, add in some hot water and mix together using your hands (being careful not to burn yourself).

Step 2: knead the dough for a few minutes to form a ball that's sticky enough to stay together, but not coming off on your hands. Divide it into thirds and roll each piece out between a few pieces of wax or parchment paper using a rolling pin.

Step 3: cook the tlayudas in a large cast-iron skillet over medium. They should be fairly crispy and firm with char marks on each side (like a thin-crust pizza shell).

Step 4: once the tlayudas are cooked, spread a layer of oil on each one, then refried beans. Add shredded cabbage and cheese, then add it back to the pan.

Step 5: while the cheese is melting, heat some vegan chorizo in a separate pan. Add it to the top of the cheese and finish cooking. Garnish with sliced avocados tomatoes, queso fresco, salsa verde, or cilantro. Happy eating!

If you're like us and love eating leftovers, tlayudas are for you. Just don't forget to store them properly!

Vegan tlayudas will last in the fridge for up to 4-5 days. Keep them in airtight glass containers to preserve the flavors a bit better than plastic. But, just use whatever you have!

Although we don't recommend storing fully dressed tlayudas in the freezer, you can definitely freeze the base. Just store them in freezer-safe bags and they'll last for up to 8 months.

When you're ready to eat tlayudas again, heat them on a dry skillet or comal over medium for about 45-60 seconds. You can also reheat them in an oven for about 2-4 minutes at 375 degrees F.

We'd like to share some tips and tricks we learned while experimenting with a plant-based version of tlayudas Oaxaqueñas:

If you want to try a Oaxacan version of thin-crust pizza, this is the recipe for you. It's:

If you try this version of tlayudas Oaxaqueñas, please rate it and leave us a comment below! Want to stay up-to-date with new recipes? Subscribe to our newsletter or connect with Broke Bank Vegan on social media. Happy eating! 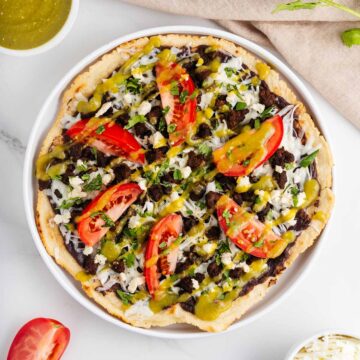 For more crispy, crunchy snacks, check out our:

Can these be made oil-free?

Yes, tlayudas can easily be made without using refined coconut oil or vegetable shortening. We included these ingredients to emulate the lard traditionally found in this recipe, but we think they're equally delicious without oil.

How big should my tlayudas be?

Most tlayudas are quite large, measuring almost 14-16". You can honestly make them as big or as small as you want though since you'll be the one eating them (and you need a big enough pan).

Tlayudas are made with masa harina so they are completely gluten-free. However, just make sure none of the toppings you use contain gluten.