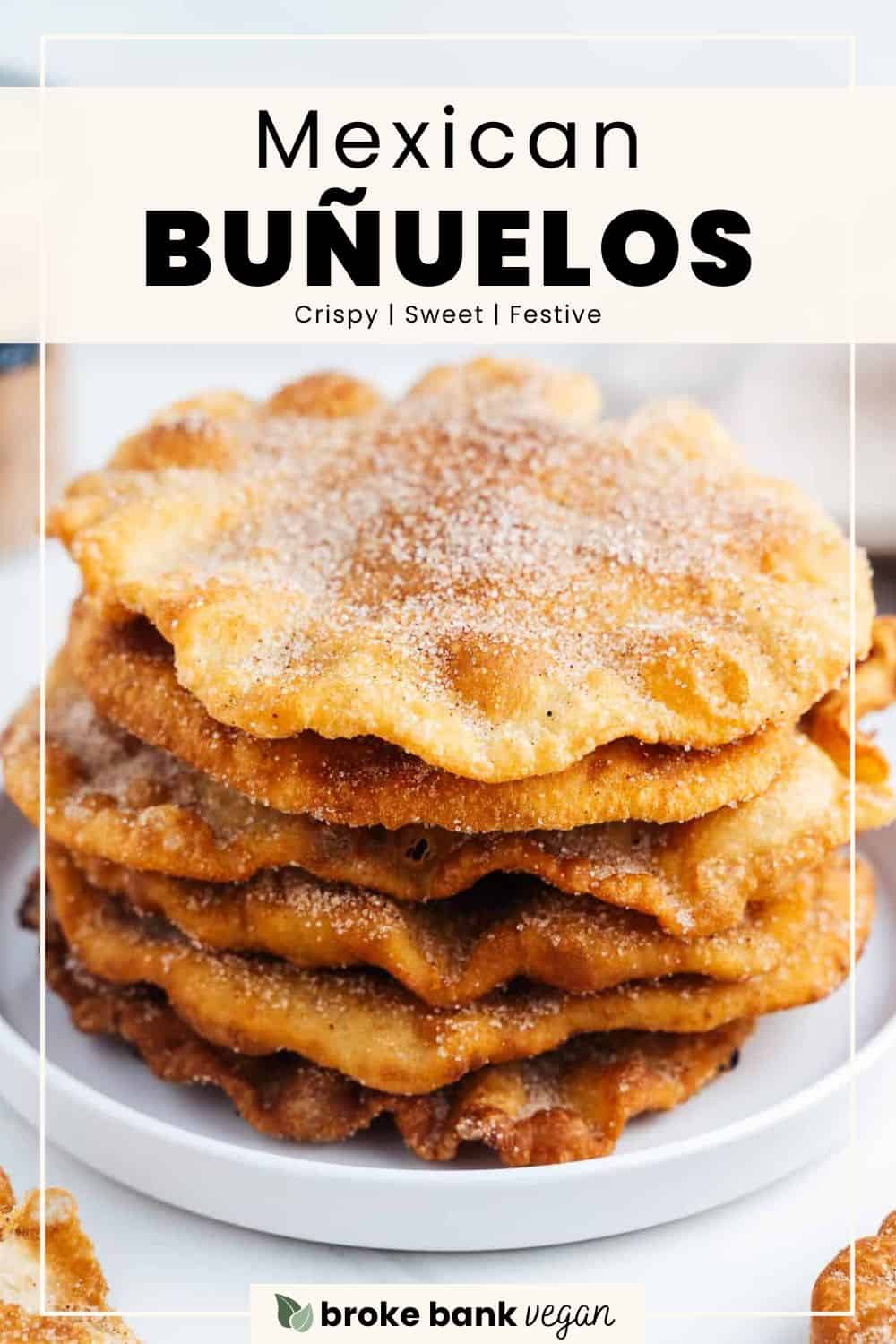 Buñuelos are a type of Mexican fritter sprinkled with cinnamon and sugar. Once fried, this golden-brown snack has a light and airy texture with just the right amount of crispiness. Serve it on its own or with hot chocolate for the perfect holiday treat!

❤️ Why you’ll love this recipe

If you enjoy making (and eating) Mexican desserts, you definitely need to try our plátanos fritos, gorditas de piloncillo, and mueganos.

Typically enjoyed during the Christmas season, buñuelos are found in many Latin American countries. They come in a wide variety of shapes, sizes, and flavors, ranging from sweet to savory.

A common preparation for Mexican-style buñuelos (buñuelos mexicanos) begins with thin, round fritters that are fried until golden brown and crispy. Each piece is then lightly dusted with sugar to give it a hint of sweetness

Our favorite way to eat buñuelos is with a cinnamon-sugar dusting (similar to churros), but there are endless flavors and toppings you can try!

In every region of the world, similar versions of fritters have stemmed from ancient times. Some examples include youtiao, lokma, tulumba, and zalabiyeh.

The first records of buñuelos can be traced back to the Moorish people of Iberia, which is where Spain and Portugal are now located. Typically made from wheat dough, they were also sometimes flavored with anise and served with syrup.

During the colonial period, Spaniards brought these dough fritters to Latin America. From there, new shapes, flavors, and sauces formed, creating buñuelos mexicanos.

Fun fact: In the state of Oaxaca, buñuelos are served with clay bowls. Once finished, the bowl is supposed to be thrown while making a wish for good luck.

Many traditional buñuelos mexicanos recipes call for eggs and butter to make the dough. But with a few small tweaks, these fritters can definitely be made 100% plant-based.

Vegan buñuelos taste just as delicious and crispy without eggs or egg substitutes. Instead of adding butter to the dough, we use vegetable or coconut oil. Additionally, since a lot of sugar brands use bone char in the processing, we opt for cane sugar whenever possible.

📝 How to make buñuelos

Sift the flour and baking powder into a large mixing bowl. Add the salt and whisk the dry ingredients together.

Then, add the melted coconut oil and water to the dry ingredients and stir together. Remove the dough from your mixing bowl onto a lightly floured surface.

Begin kneading the dough to form a ball that's sticky enough to stay together, but not coming off on your hands. Keep kneading for 10 minutes, or until it is smooth and elastic.

Note: If the dough appears too crumbly, continue adding water a tablespoon at a time. If it's too sticky, add a little flour while still kneading.

Cut the ball of dough into 8 smaller pieces, then roll each one and flatten it slightly between your palms. Cover with a towel to rest for 30 minutes.

In the meantime, line a tray or plate with some paper towel, mix the cinnamon and sugar together, and add 1-2 inches of oil to a large stockpot for frying the buñuelos.

Lightly flour each side of one dough disc and place it in the center of a tortilla press lined with 2 pieces of plastic. Close it down to form thin tortillas (they should be almost see-through).

Note: You can also roll them out on a floured surface and place a clean tea towel over your knee to finish stretching them out (hence the name buñuelos de rodilla!)

Heat oil to 350-375°F in a large stockpot over medium, or until a piece of dough sizzles and floats to the top. Cook one buñuelo at a time for 30-45 seconds per side, or until golden.

Note: Make sure to push down on the buñuelo with a spoon or spatula to keep the bubbles from growing too big!

Transfer each buñuelo to the paper towel-lined plate or tray to absorb the excess oil. Sprinkle each side with the cinnamon-sugar mixture. Repeat until all the buñuelos are cooked, then serve immediately. Happy eating!

If you have questions about making buñuelos, check out our FAQs or leave a comment down below!

☕ What to serve with buñuelos

Buñuelos mexicanos often accompany warm drinks like atole or hot chocolate as a sweet ending to a meal. Try any one of these plant-based versions:

Note: It's common to serve buñuelos with piloncillo syrup. Try it out to see if you like it!

After all that hard work, you are definitely going to want to keep your buñuelos crispy, delicious, and as fresh as possible. Here's how:

Is a buñuelo the same as a sopapilla?

They're very similar, especially when comparing vegan buñuelos to sopapillas. The biggest difference is that buñuelos have a crispy, flaky texture with a sugar coating. Sopapillas are softer, puffed up into a pillow shape, and drizzled with sweet syrup (although both desserts have variations).

Do I have to let the dough rest?

Make sure you let the dough rest for at least 30 minutes. This helps relax the gluten bonds that you've formed with kneading. It will make rolling easier and result in thinner, crispier buñuelos!