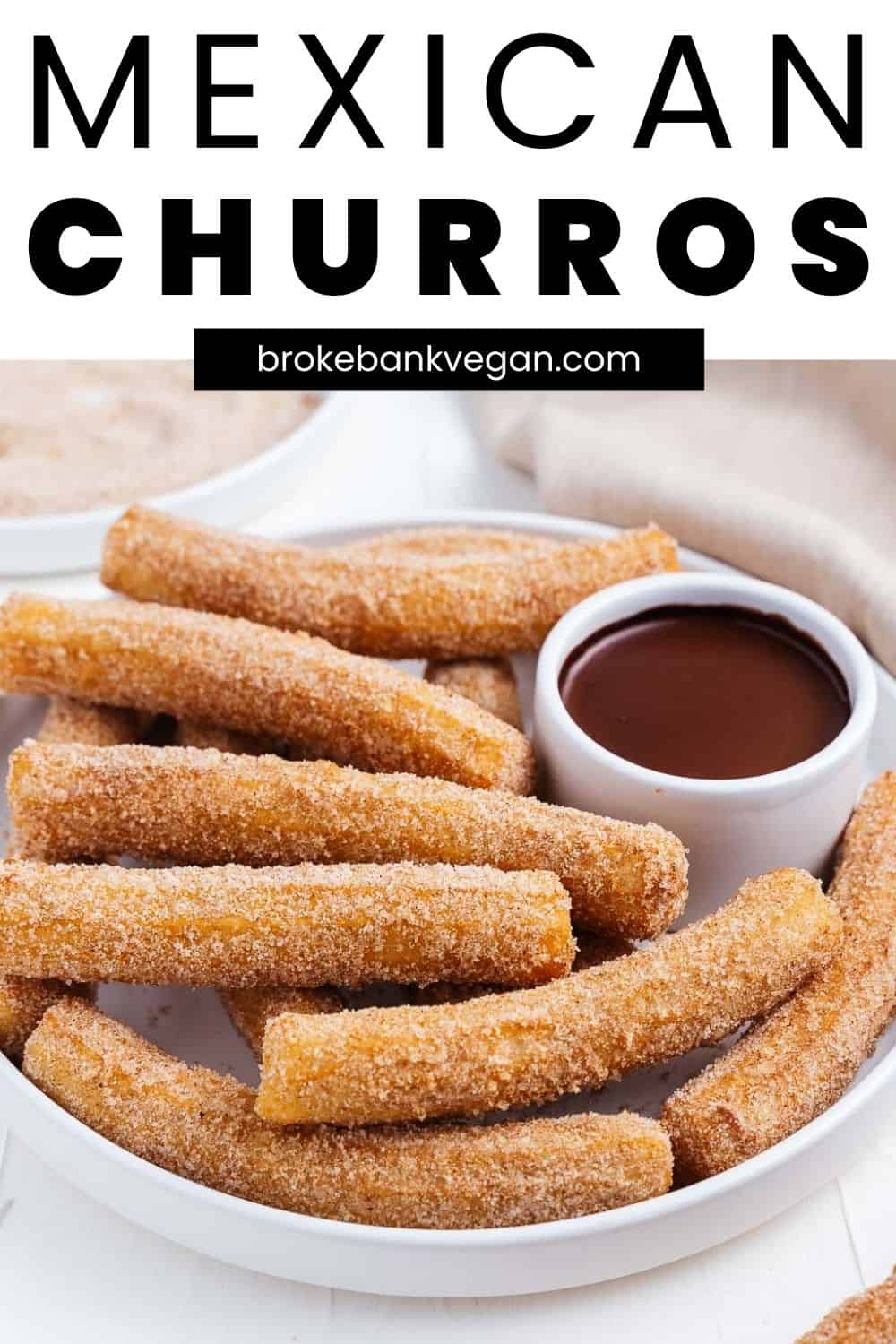 Get ready to sink your teeth into the best vegan churros you'll ever taste! Crispy on the outside, yet warm and tender on the inside — what's not to love? Don't forget the cinnamon-sugar coating and a side of rich chocolate sauce.

Churros are a classic dessert served all over the world, including in many parts of Europe and Latin America. To make a churro recipe, you really only need the following 3 ingredients:

Once mixed, the dough is added to a churrera and squeezed out into hot oil, creating long, ridged, and crispy churros.

Sometimes, other shapes are made with the dough (like circles or spirals). Other times, the churros are hollowed out and filled with different sauces like cajeta, chocolate, cream, jam, etc.

Although the rules are not set in stone, there are a few key differences between Spanish and Mexican churros.

Fun fact: Some food historians think churros descended from a Chinese pastry, called youtiao. What do you think?

Depending on where they're made, churros may be vegan or not vegan. The ingredients you should be mindful of or ask about are the following:

For complete ingredient measurements and instructions, see our recipe card.

If you have questions about making these vegan churros, check out our FAQs or leave a comment.

Step 1: Heat water, salt, and vegetable oil together in a medium saucepan. Once simmering, transfer the mixture into a bowl with the flour.

Step 2: Stir the dough until it's well combined, then let it cool for around 10 minutes while you combine the cinnamon and sugar in a shallow bowl or plate.

Step 3: Transfer the dough to a churrera or a piping bag with a large star-tip attachment. Heat oil suitable for frying to 350-375 degrees F in a large pot.

Note: It's ideal to use a thermometer when working with oil. If you don't have one, test if it's ready by dropping a small piece of dough in. If it sizzles and floats to the top, you should be good to go.

Step 4: Squeeze 2-3 pieces of dough out at a time over the pot of oil (around 4-6 inches long). Cut each piece with a pair of scissors or a knife. Don't cook more than 3 at a time since the oil temperature will drop too much.

Step 5: Cook the churros until they turn golden brown. Using a slotted spoon or tongs, transfer them onto a paper towel-lined plate. When they are cool enough to handle, roll each one in the cinnamon-sugar mixture.

Step 6: Make the chocolate sauce by melting some dark chocolate, coconut milk, cinnamon, and vanilla together in a double boiler over low. Serve on the side of your warm and crispy churros mexicanos. Happy eating!

If you're making vegan churros, you need something to serve with them! Other than chocolate sauce, here are some more popular dips and drinks to go alongside:

If you can't eat your churros right away (good luck with that), there are a few storage options:

Note: We don't recommend storing your churros in the fridge as they will turn soggy.

Churros are not typically gluten-free since they are made with all-purpose flour. See our variations section for tips on making churros gluten-free.

A large majority of churros are vegan, but it depends on the recipe. For more information, see our is it vegan? section.

What can I use instead of a churrera or piping bag?

If you don't have a churrera or piping bag, you can use a large plastic bag with the corner cut off. That way, you'll still get an even churro (just without the ridges). 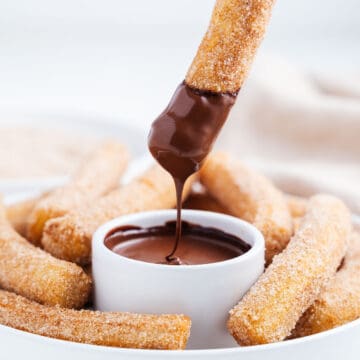 If you enjoyed making these easy vegan churros, check out some of these other treats: