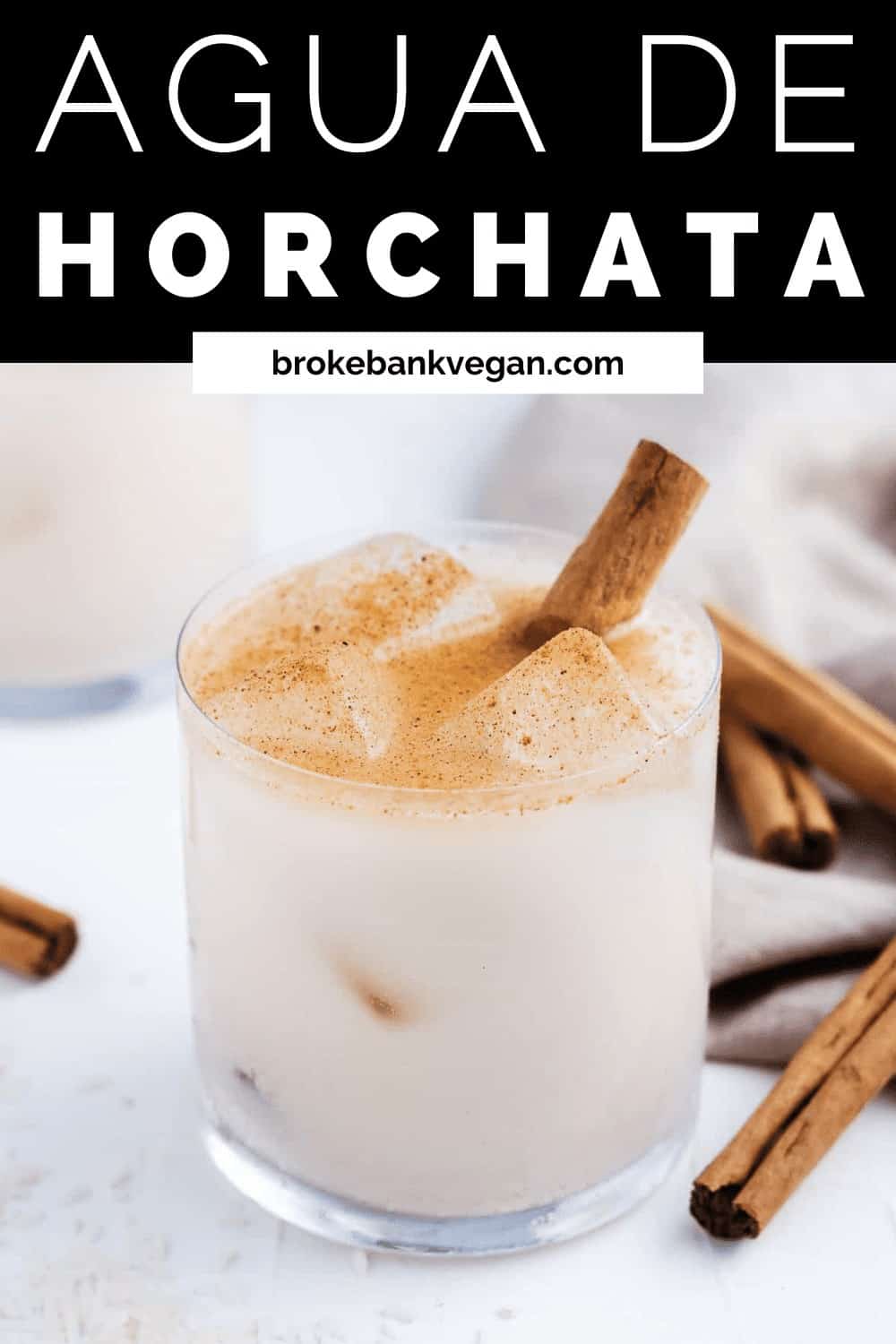 Agua de horchata is a Mexican drink that is both creamy and refreshing. It's made from a base of rice and infused with the sweet flavors of cinnamon. And the best part? This horchata recipe is completely free of dairy!

You won't believe how well a glass of this delicious drink goes down on a hot day. It carries a richer consistency compared to fruit-based drinks but won't leave you feeling weighed down like milkshakes or ice cream. It's the best of both worlds!

What is agua de horchata?

Agua de horchata is considered an agua fresca (fresh water) and is hugely popular all over Mexico. With hints of spice and vanilla, this beverage is thirst-quenching and irresistibly smooth.

Traditionally, horchata is made with just water, rice, sugar, cinnamon, and almonds. Nowadays, many horchata recipes contain milk, condensed milk, evaporated milk, or a mix of all three.

So while most horchata recipes should be vegan, it's not always the case. Don't worry though, this recipe is completely dairy-free.

We use almond milk instead of water for a slightly fuller consistency, but that's definitely not a necessity. Try it both ways to see which version you prefer!

And don't stop at serving horchata by itself! There are so many different recipes it can be added to.

You can make horchata ice cream, blend it into a milkshake, replace your coffee creamer with it, or even make delicious horchata cocktails.

See what we mean? So versatile!

Although you may be thinking horchata is one drink, we're here to tell you it's not! Horchata is more of an umbrella term that stems from ancient Roman times.

Back in those days, great minds like Hippocrates prescribed a medicinal drink to everyone made of barley (hordeum), and it was termed hordeata (a drink made from barley).

Hordeata began making its way all across Europe in different forms. With the Moorish influence in Spain, the barley was eventually replaced with tiger nuts (chufa in Spanish). This ultimately changed the taste and texture of this drink — becoming horchata de chufa.

When the Spanish conquistadors arrived in Mexico in the 16th century, they brought ingredients like rice, sugar, and cinnamon, but no tiger nuts.

It is believed the Spaniards recreated horchata with rice (horchata de arroz) instead of tiger nuts as a way to remember the flavors of home.

As you can see, there are many variations of horchata that exist across multiple continents — each with their own set of ingredients, flavors, and purposes.

Serve this vegan horchata recipe as an afternoon refresher, or pair it with Mexican dishes like tacos al pastor, sopes, or quesadillas.

Just make sure it's chilled or loaded with ice!

So, are you ready to learn how to make an agua de horchata recipe that's both dairy and gluten-free?

Taste: white rice itself has a mild, starchy flavor. This makes up the base of a Mexican horchata recipe, so don't skip it! In the drink, it gives off a sweet, rice-pudding flavor.

Fun fact: dating back to 5000 BC, rice is now grown on every continent except Antarctica.

Taste: with a sweet, nutty flavor, almond milk also has a light and creamy texture, making it perfect for this agua de horchata. We reduce it to give a rich, caramelized flavor. It's delicious!

Health: made from ground almonds and water, almond milk carries many nutritional benefits, including being high in the antioxidant vitamin E! Almond milk is also low in calories relative to cow's milk (39 compared to 124 calories per cup).

Health: cinnamon is known for its potent antioxidant properties. Did you know cinnamon has shown benefits to blood sugar control in people with diabetes? Not only that, but it can also have a lowering effect on cholesterol. Now that's a spice you want in your life!

Taste: sweet is one of the five universally accepted tastes, and we love it! We use cane sugar to round out this horchata recipe and give it an authentically sweet and rich flavor.

Fun fact: Mexican Coca-Cola actually contains cane sugar rather than high-fructose corn syrup like the rest of the world.

If you have questions about this vegan horchata recipe, don't forget to check out our FAQ section at the bottom of this post.

Step 1: wash and drain your rice. Add it to a large bowl with the cinnamon sticks and 4 cups of boiling water. Let the water cool to room temperature, then cover the bowl and let it rest for at least 5-6 hours, but preferably overnight.

Step 2: the next morning (or the night before), add your almond milk and cane sugar to a small saucepan. Bring it to a low boil, then simmer for around 20-30 minutes until it reduces by half. Let it cool, then cover and store in your fridge overnight, or until you are ready to use it.

Step 3: when the rice is soaked, add the rice, one or both cinnamon sticks, and water to your blender and mix on medium until smooth. You may have to blend in 2 separate batches depending on the size of your blender.

Note: you have a few options for blending the cinnamon. You can blend the whole cinnamon sticks with the rice and strain the pieces out, add ½ teaspoon of powdered cinnamon, or leave both out. It all depends on your personal preferences!

Step 4: once smooth, pour the rice mixture in batches through a very fine mesh strainer, cheesecloth, or nut milk bag into a large bowl. Squeeze or press down with a spoon to pass as much liquid through as you can.

Step 5: pour it through the strainer or cheesecloth at least once or twice more (to catch any extra grainy bits). Continue this process until all the rice water has been transferred to your bowl.

Step 6: mix in the rest of the water, reduced almond milk, and vanilla. Taste and adjust the sweetener if you want. If you prefer a thinner consistency, add in more water. If you prefer it creamier, add in fresh almond milk.

Step 7: transfer to a large jar or pitcher for storage. Serve your agua de horchata chilled on ice with a sprinkle of cinnamon on top!

For an optimal flavor infusion, let this horchata recipe chill in the fridge for a few hours before serving.

Store your agua de horchata in a glass container in the fridge for up to 1 week. We think the flavor is always best coming out of glass. Whether you use a jar or pitcher, make sure it's covered to protect it from all the other flavors in your fridge.

Want even tastier ice cubes for your next batch of vegan horchata or iced coffee? Portion some horchata out in ice cube trays and freeze for up to 1 month. You can also freeze the whole recipe and thaw it in your fridge overnight when you want some.

We'd like to share some tips and variations we learned while experimenting with this agua de horchata recipe:

We absolutely love serving a tall glass of agua de horchata when the weather is hot, and we know you will too! It's:

If you try this vegan horchata recipe, please rate it and leave us a comment below! Want to stay up-to-date with new recipes? Subscribe to our newsletter or connect with Broke Bank Vegan on social media. Happy eating! 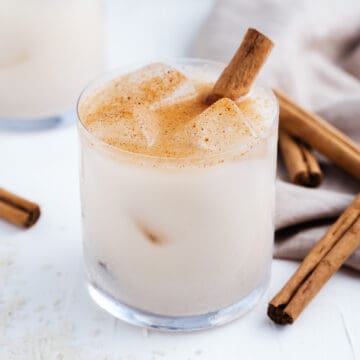 For more tasty drink recipes, check out our:

Can this horchata recipe be made nut-free?

Yes, this agua de horchata can be made nut-free. Simply opt for a different plant milk variety like soy, rice, or coconut. Or, replace the almond milk with water.

Can I use other types of rice in my horchata?

Horchata recipes are traditionally made with long-grain white rice. You can use basmati or brown rice if you'd like, but it will alter the flavor.

Can this be made without a blender?

There's no real way to make this recipe without a blender. A quick fix would be to use pre-made rice milk instead of blending it, but now we're just making a whole different recipe.

Do I need to reduce the almond milk?

While you do not need to reduce the almond milk, we think it adds a rich, caramelized flavor that makes this vegan horchata taste so delicious. For a quicker version, just add fresh almond milk and sugar.