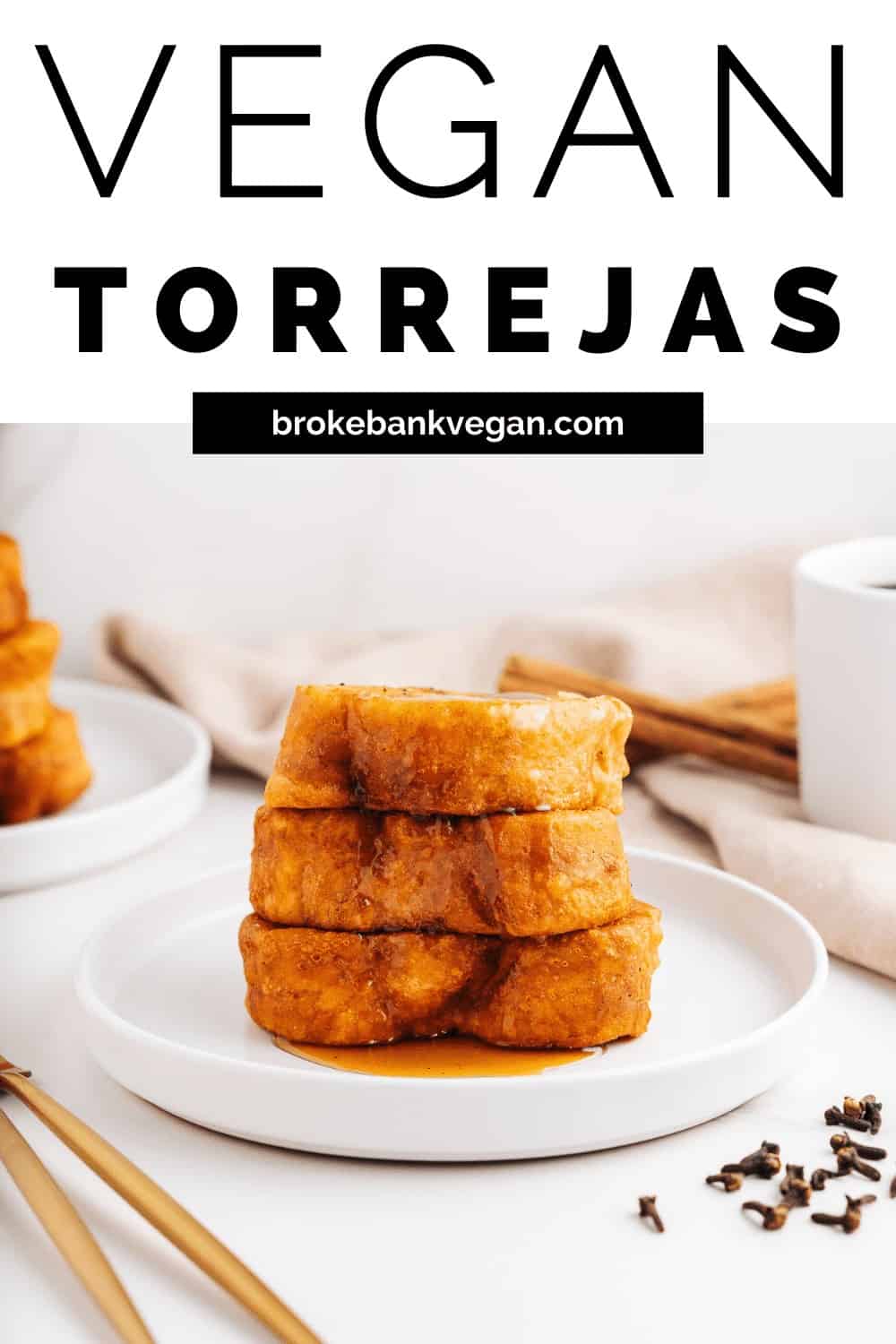 Try torrejas for a Mexican take on French toast. In this vegan version, bolillo bread is coated with plant milk and chickpea flour to replace the egg batter. The slices are cooked to golden brown perfection, then finished off with a cinnamon-infused piloncillo syrup.

Torrejas are quick to make, filled with flavor, and great for all ages. If you're big on sweet breakfasts, this recipe is calling your name. Try it for your next Sunday brunch!

The word torreja in Spanish means "slice," and this tasty recipe is Mexico's version of a French toast breakfast.

Typically, stale bolillo bread is cut into slices and covered in a whipped egg batter. The slices are crisped up in a skillet of hot oil, then soaked in a piloncillo syrup before being plated.

Did we mention even more syrup is drizzled on top?

This dish is clearly perfect for all ages, occasions, and seasons!

One thing to note...

Some variation of torrejas can be found in basically every country (going by different names), so this recipe may mean something different depending on the person.

Of course, this version is just our take on a widely made dish.

Because of the egg-based batter, torrejas are traditionally not vegan-friendly. But instead of using eggs, we swapped in some high-protein chickpea flour.

Let us be the first to tell you, the texture is perfect! Chickpea flour can be used in all sorts of recipes that call for eggs. You'd be surprised at how versatile this nifty little ingredient is!

Torrejas have a bit of a sticky history... okay, we couldn't resist!

There are a lot of variations and accounts of where and when this recipe originated, so we just wanted to give a brief overview.

A simplified version of this breakfast (or dessert) dates back to Roman times. However, torrijas (as it's spelled in Spain) became more popular in the 15th century.

Nuns of the Catholic church believed serving anything with eggs was a sign of fertility, which is why this dish was originally served to pregnant women.

From there, it became a popular meal to eat around Lent and Easter in Spain (how this all unfolded is still uncertain).

The dish then made its way to Mexico and other Latin American countries when the Spanish conquistadors arrived. Of course, ingredients and preparations were altered over time based on availability and taste preferences.

Now referred to in Mexico as torrejas, slices of battered bolillo bread are fried and covered in a sticky piloncillo syrup. They're served across the country for a tasty and delicious breakfast or dessert.

Serve your vegan torrejas soon after they cook for a hot and crispy meal.

From there, you can customize this dish in so many ways — it really depends on the taste and textures you're after!

In many recipes, it's common to soak the bread in piloncillo syrup before serving it. We've tried this and prefer to skip that step — we like our bread to have more structure and crispiness. This is what we mean by customizability!

You can try adding different spices to your syrup too. Our absolute favorites are clove, cinnamon, and orange peel, but star anise is delicious. For a fruitier version, you might even enjoy your torrejas with a strawberry compote!

Taste: making the base of these torrejas is none other than Mexican bolillo bread, which is slightly crispy on the outside and chewy on the inside. It's best to leave your rolls out 2-3 days before making this recipe so the bread doesn't turn out too soggy.

Fun fact: bolillo bread was introduced to Mexico by the French during the colonial time period. Originally known as a baguette, the size, shape, and flavor slowly altered over time to become its own distinct type of bread.

Taste: with a slightly earthy and nutty flavor, chickpea flour is a popular egg replacement used within vegan cooking. In this recipe, we use it to emulate the egg batter that normally coats each torreja.

Health: lower in carbs and overall calories than wheat flour, yet higher in protein and fiber, you can see why chickpea flour is our top choice whenever we have the chance to use it.

Taste: with a more complex flavor than brown sugar, piloncillo has notes of caramel, hints of molasses, and a slight smokiness. It's the perfect ingredient to form a syrup base for all kinds of recipes in Mexican cooking.

Health: because piloncillo is 100% pure evaporated sugarcane juice, it comes with the benefits of no preservatives, but it does contain vitamins like B, A, and C. It's also a fairly decent source of calcium, so your bones will be thanking you!

Taste: adding a more complex flavor to the syrup is a stick of Ceylon cinnamon. Using a whole stick helps infuse the warming spice and sweetness of cinnamon better than the powder form. And if you can get your hands on some, Mexican cinnamon is superior to Cassia cinnamon.

Health: with large amounts of polyphenol antioxidants, Ceylon cinnamon is important in helping the body ward off disease. It also contains powerful anti-inflammatory properties. Not a bad ingredient to have laying around!

If you have questions about this vegan torrejas recipe, don't forget to check out our FAQ section at the bottom of this post.

Step 1: cut the bolillos into ~¾-inch slices, then bake them at 300°F for about 5 minutes or so to dry out the bread. Alternatively, slice your bread the night before and leave it out!

Step 2: simmer the water, piloncillo, cloves, cinnamon, and orange peel together for 10-15 minutes, or until slightly thickened. Strain the syrup to remove the orange, cinnamon, and cloves.

Step 3: whisk the chickpea flour and water together in one bowl, and the plant milk, cane sugar, and vanilla in another bowl. If the sugar is not dissolving, heat your milk mixture until warm.

Step 4: dip each slice of bread in the milk first for 15-20 seconds per side, then in the chickpea flour “egg” mixture. Fry them in a skillet of hot oil until golden brown on each side.

Step 5: transfer your torrejas to a paper towel-lined plate to absorb excess oil. If you want to keep them extra warm, store the cooked ones in your oven while you make the rest.

Step 6: to serve your torrejas, you can either soak them in the piloncillo syrup or serve them with a drizzle over top (our preferred method). Happy eating!

Nothing beats leftover torrejas for a quick snack or tasty dessert. Follow these storage instructions to keep everything locked and loaded.

Your vegan torrejas will last in the fridge for up to 4 days. Just make sure to store them in glass containers so other flavors don't seep as they do with other materials.

To freeze your leftovers, separate each slice with wax paper and store them in a heavy-duty freezer bag. They will keep this way for around 1-2 months in the freezer.

To reheat your torrejas, spread them out on a baking sheet and bake at 350°F for about 10 minutes, or until they are warm all the way through.

To achieve the same level of crispiness as the first time around, it's best to fry them in hot oil again or use an air fryer if you have one.

Try making torrejas for an extravagant weekend breakfast — you won't regret it! They're:

If you try this vegan torrejas recipe, please rate it and leave us a comment below! Want to stay up-to-date with new recipes? Subscribe to our newsletter or connect with Broke Bank Vegan on social media. Happy eating! 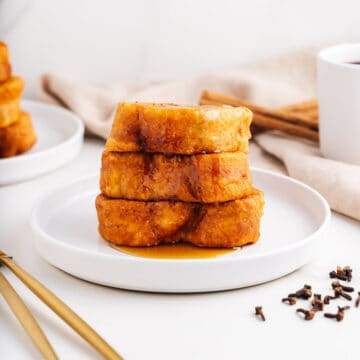 For more sweet breakfast recipes like this one, check out our:

Why is my bread soggy?

If your bread is soggy, there's a good chance it wasn't dry enough. Leave the slices out overnight or dry them out in your oven before making this recipe. Also, don't leave them sitting in the batter too long.

How can I make my syrup thicker?

Although this syrup is meant to be thinner than agave or maple syrup, you can thicken it by reducing it further on the stove or adding less water.

Torrejas are usually made with wheat-based bread such as bolillo rolls. If you want to make a gluten-free version, just swap in your favorite gluten-free bread.