Try these snickerdoodles without cream of tartar for a chewy, soft, and delicious cookie recipe. With the perfect ratio of cinnamon sugar, you're going to have a hard time stopping at just one!

❤️ Why you'll love this recipe

Everyone loves cookies, but these snickerdoodles without cream of tartar are one of our favorites! We know you'll love them because they're:

Easy-to-make — Snickerdoodles are simple to whip up, making them perfect to bring to parties and gatherings.

Kid-friendly — Kids love them, and they can easily help with making them!

Plant-based — This recipe is completely egg and dairy-free, which means more people get to enjoy it!

Soft & chewy — Much like our ginger molasses cookies, the snickerdoodle texture is perfectly moist, soft, and chewy.

📖 What is a snickerdoodle?

Snickerdoodles are often synonymous with sugar cookies, but there are a few distinctive qualities that make them unique.

A typical snickerdoodle cookie recipe calls for butter, flour, sugar, and cream of tartar. The dough balls are then rolled in cinnamon sugar before being popped in the oven.

With this list of ingredients, snickerdoodles turn out lighter and fluffier than traditional sugar cookies. They also taste slightly tangier with a classic cinnamon-sugar coating.

🥛 What is cream of tartar?

Cream of tartar is one of those misunderstood ingredients found on the lists of popular recipes like snickerdoodles and meringue.

Despite to what you might think, cream of tartar is an acidic powder. It's formed as a byproduct of fermenting grapes into wine.

Cream of tartar is also known by other names like potassium bitartrate, potassium hydrogen tartrate, or tartaric acid.

Fun fact: A lot of the time, baking powder is made from a mixture of baking soda and cream of tartar.

🤨 What does cream of tartar do in snickerdoodles?

Cream of tartar plays a key role in various recipes. But in snickerdoodles, it does the following:

Leaving agent — When mixed with baking soda, it gives rise to snickerdoodles and prevents a dense texture.

Tangy — Cream of tartar provides a characteristic tanginess to snickerdoodles.

Prevents crystalizing — Cream of tartar prevents sugar from hardening, which results in a chewier inside.

🍪 Can you make snickerdoodles without cream of tartar?

You can absolutely make snickerdoodles without cream of tartar! In fact, baking powder had quite an interesting role in the early days of snickerdoodles.

Some experts argue the oldest recipes contained baking powder, while others say it was a mixture of baking soda and cream of tartar. Regardless, both act equally well as leavening agents, though the cookies won't be as tangy with baking powder.

Read all about the history of baking powder for more information.

There are quite a few theories on how snickerdoodles came to be, but the most likely scenario begins with snipdoodles (so many doodles, so little time).

The Pennsylvania Dutch are credited with the invention of snipdoodles, a type of German coffee cake. While the name initially referred to a variety of coffee cakes, recipes evolved to include cinnamon, butter, and a dusting of sugar.

In Stella Parks' cookbook, Bravetart, she mentions that by the late 19th century, snipdoodle cakes were made in shallow baking pans, cut into bars, and topped with cinnamon sugar.

Over time, these cakes turned into snickerdoodle cookies with the earliest recorded recipe in 1889.

Snickerdoodles without cream of tartar often call for butter and eggs, deeming them vegetarian-friendly.

In this recipe, we've swapped out dairy-based butter and used our favorite plant-based brand. We've also replaced eggs with corn starch for a chewy cookie texture (just like these peanut butter cookies).

Flour — We use all-purpose flour, but you can replace it 1:1 with a gluten-free blend (though we haven't tested it). For a more accurate recipe, make sure to weigh the flour.

Butter — Use dairy-free stick butter that is softened to room temperature. We always look for Miyoko's, Fora, Melt or Earth Balance for the best baking results.

Baking powder — To leaven the snickerdoodles instead of cream of tartar and baking soda. Note: Your cookies won't be quite as tangy with baking powder, but you can add a few drops of lemon juice or vinegar.

Corn starch — We prefer corn starch and water as an egg replacement. It creates a chewy cookie texture you won't be able to get enough of.

Sugar — Use granulated cane sugar. We haven't tried this recipe with brown sugar or sugar alternatives.

Vanilla — To enhance the flavor of the snickerdoodles. Use pure vanilla extract whenever possible.

Cinnamon — Mixed with extra cane sugar to roll the cookies in. Use Ceylon (true) cinnamon over cassia cinnamon.

Step 1 — In a mixing bowl, sift the flour, baking powder, and salt together. Set that bowl aside for now.

Step 2 — In a stand mixer or a large mixing bowl with a hand mixer, beat the vegan butter and cane sugar together for a few minutes, or until light and fluffy.

Step 4 — Beat for another 30-60 seconds to incorporate the rest of the wet ingredients into a light and airy texture.

Step 5 — Slowly add the dry ingredients to the wet ingredients, mixing on low until just combined (careful not to overmix).

Step 6 — Cover the bowl and chill in your fridge for a few hours or overnight. When the dough is chilled, preheat your oven to 350 degrees F and line a couple of baking sheets with parchment paper or silicone mats.

Step 7 — Mix the cinnamon and sugar together in a shallow bowl. Scoop out 2 tablespoon balls and roll until smooth. Coat well in the cinnamon-sugar mixture, then transfer them to your prepared baking sheets.

Step 8 — Bake the cookies for 8-10 minutes, or until the edges are just turning a light golden color. Leave the cookies on the baking sheets for 5 minutes to finish setting, then transfer them to a wire rack. Happy eating!

If you have questions about making snickerdoodles without cream of tartar, check out our FAQs or leave a comment down below!

🥛 What to serve with snickerdoodles

Rice atole — A creamy Mexican drink made from rice, cinnamon, and milk.

If you're making your cookies in advance, keep these storage times in mind:

Freezer — Once they are completely cooled, transfer your snickerdoodles to a freezer-safe bag or container. They will last in the freezer for up to 3 months.

Thaw — Thaw your cookies at room temperature until they're soft.

Freezing the dough — To freeze for later, roll the balls of dough in cinnamon sugar and line them on a baking sheet. Place sheet into your freezer until the balls are solid. Once frozen, transfer them to a freezer-safe bag for storage.

Reheating — We always love warming our cookies back in the oven at 300 degrees F for about 60-90 seconds, or until warm. If you're using frozen cookies, they will take a bit longer to bake.

Gluten-free — Although we haven't tested it, you can try replacing all-purpose flour with King Arthur Baking Measure for Measure gluten-free flour.

Other spices — Create a unique twist on your snickerdoodles by adding spices like anise, chai, or cardamom. You never know, it could be even tastier!

Pumpkin — Add pumpkin purée to the dough and roll the cookies in pumpkin spice seasoning for a fall version of snickerdoodles.

Frosting — If you're feeling adventurous, try cinnamon frosting on top.

Acid — If you're missing the tangy flavor that cream of tartar provides, add a teaspoon of vinegar or lemon juice to your dough.

Beat the butter and sugar — The more air you whip into the butter, the lighter and fluffier your cookies will be.

Transfer to a wire rack — After leaving the cookies for 5 minutes on the baking sheet, get them to your cooling rack right away to keep the insides soft.

Don't over-bake — To reduce your chances of under or over-baking the snickerdoodles, use an oven thermometer.

Do a test — Since oven temperatures vary by design, we recommend testing a small batch first.

Sift the flour — For more accurate measurements, sift your flour before measuring it. This will also help break up unwanted clumps and aerate the ingredients.

Why are my snickerdoodles so thick?

If your snickerdoodles are quite thick and dry, you likely added too much flour.

How do I know my snickerdoodles are done?

The edges should appear to be turning very light gold, and the middles will still look slightly underdone. This is when they should be removed from your oven.

What can I substitute for cream of tartar in my snickerdoodles?

You can easily replace cream of tartar in snickerdoodles with baking powder (like in this recipe) or a combination of baking soda and vinegar.

If you enjoy these snickerdoodles without cream of tartar, try baking some of our other popular cookie recipes: 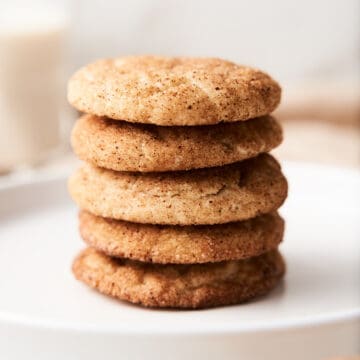 Snickerdoodles Without Cream of Tartar