Try atole de elote for a sweet, creamy, and cinnamon-infused corn drink. This dairy-free version is the perfect morning energy boost or complement to tasty snacks like tamales. You are going to love it!

Atoles are a style of drink in Mexico with a long history we can't wait to unpack with you. This version is full of rich flavors and carries unique health benefits you may appreciate!

What is atole de elote?

Also known as corn atole in English, atole de elote is a beverage usually enjoyed alongside tamales. However, it can also be served at breakfast or as a treat in the evening.

Most recipes usually consist of three base ingredients: water, milk, and thickener (most often cornstarch or masa harina).

There are many different flavors of atole like atole de guayaba (made with guavas), champurrado (made with chocolate), or atole de elote (made with corn).

Even though atoles are traditionally made without milk, it's commonplace for recipes to include it nowadays to provide a richer consistency.

In this version, we add sweet corn (or elote dulce) because when we taste-tested, it was definitely our favorite. But, feel free to use any variety you want for your own atole de elote recipe.

Atole stems from the Nahuatl word "atolli", which loosely translates to "corn drink." This leads us (and legitimate food historians) to believe atole has been enjoyed for hundreds of years, dating back to the Aztecs.

Due to a lack of modern technology and access to fewer ingredients, it is thought the original versions of this drink looked much different than they do today.

Most sources describe a drink consisting of mashed corn (rather than finely ground flour) mixed with only water and possibly a few spices like chiles.

However, as with many recipes, the large influx of Spaniards had an effect on atole. A well-known Spanish conquistador, Hernán Cortés, apparently found atole "energizing but not a flavor Spaniards enjoyed."

Over time, Spanish ingredients (like sugar and milk) found their way into many recipes. The modern-day result is a product of both cultures.

The use of milk was not introduced until the arrival of Spaniards, meaning atole is traditionally vegan-friendly.

Nowadays, however, there is a heavy emphasis on the use of dairy products within Mexican cuisine. Most atole de elote recipes include a combination of milk and water as the base.

In this recipe, we utilized soy milk to provide a similar taste and texture while remaining 100% plant-based.

A warm cup of atole de elote is the perfect way to wake up, especially on cooler mornings. And a little sprinkle of cinnamon really puts it over the edge.

This atole de elote is vegan, gluten-free, delicious on its own, or served alongside your favorite snacks.

Taste: with sweet, starchy, mellow flavors, yellow corn is our favorite variety to use in atole de elote. It creates a perfectly balanced drink without the need for too much sweetener (as you might need with other types).

Health: considered both a vegetable and cereal grain, yellow corn contains heaps of health benefits. It's packed with thiamine, folate, magnesium, and even more fiber. Yellow corn is an energy-producing powerhouse!

Taste: to create a rich and creamy corn atole, our go-to plant milk is soy! It provides the best consistency, especially when trying to replace cow's milk. This is definitely a personal preference though, so feel free to swap in your favorite variety.

Health: soy milk is full of omega-3 fatty acids, which are essential in building almost every cell in your body. Plus, there are over 7 grams of protein in just one cup. Pretty impressive!

What it is: piloncillo is considered the rawest form of cane sugar, and it's used extensively in Mexican cuisine. It's made by cooking down cane juice, then transferring it to special cone-shaped molds. Hence the name piloncillo, which means pylon.

Taste: it has a similar flavor to brown sugar but with more complexity. Piloncillo provides notes of caramel, smoke, and molasses to this recipe.

Where to buy: you can find piloncillo in most grocery stores by its other name — panela. Also, try your local Mexican market if you live close to one. If it's not showing up in those places, piloncillo is also available to order online.

Taste: the delicate, mild, and sweet flavors of Ceylon cinnamon make it a kitchen staple. Simmering a whole stick infuses the drink in a well-rounded way so that each sip of your atole de elote is filled with warming, spice-infused notes.

Health: cinnamon has been used in Eastern and Western medicine for decades. In fact, cinnamon carries many anti-inflammatory properties amongst other health-promoting capabilities.

If you have questions about this atole de elote recipe, don't forget to check out our FAQ section at the bottom of this post.

Step 1: simmer the water and cinnamon stick together for a few minutes to infuse the flavors, then add in the piloncillo and let it dissolve. Strain the pieces of cinnamon out, then add the liquid back to the pot.

Step 2: cut the corn kernels from the cob, and add them to a blender along with the soy milk. Blend the mixture until smooth, then transfer it into the pot as well.

Step 3: simmer your atole for around 10 minutes while stirring very frequently. Combine the corn starch with a little water in a separate bowl, then add it to the pot along with a dash of vanilla.

Step 4: simmer everything together for another few minutes, or until it reaches your preferred consistency. Serve your corn atole on its own with a garnish of cinnamon, or alongside snacks like tamales. Happy drinking!

Once you try a cup of creamy atole de elote, you'll probably want to start making plans for another batch. Find out how to maximize the shelf life of this delicious drink below.

This corn atole will store in the fridge for around 3-4 days. We typically use mason jars to keep the flavors fresh for longer.

The longer atole sits in your fridge, the thicker it gets. Before serving more, heat it on the stovetop over medium-low for 4-5 minutes while whisking it together.

We'd like to share some tips and tricks we learned while experimenting with this creamy corn drink:

There's nothing quite like drinking a freshly made cup of atole de elote. It's:

If you try this vegan corn atole, please rate it and leave us a comment below! Want to stay up-to-date with new recipes? Subscribe to our newsletter or connect with Broke Bank Vegan on social media. Happy eating! 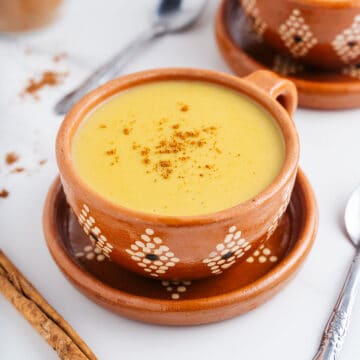 For more unique and delicious Mexican drinks, check out our:

If you're making atole, you'll most likely want to use either masa harina or corn starch to thicken it. If you're using fresh corn, it may have a high enough starch content.

Corn atole is completely free of gluten, making it perfect for anyone with gluten intolerances or celiac disease.

Can you use any type of corn in atole de elote?

Yes! Any type of corn works in atole, but the overall taste, consistency, and sweetness will vary based on the kind you use.