The chile pasilla (or pasilla pepper) is an extremely popular and widely utilized chile in Mexican cuisine. Find out everything you need to know in this detailed guide, including how to prepare it for recipes.

📖 What are chiles pasillas?

Chile pasilla is the name given to ripened, dried chilaca peppers — which belong to the Capsicum annuum species.

These peppers are native to Southern North America and Northern South America.

Chilaca peppers are very dark green, but they are sometimes referred to chile negro because as they mature their color darkens to a brownish hue. These peppers usually grow to 6-9 inches long and about 1 inch in diameter.

Chilaca peppers turn into pasilla peppers once they are dried (under the sun or in a dehydrator). They can then be ground or rehydrated and used in many different recipes.

Once the chile pasilla is formed, it takes on a whole new set of characteristics and flavors compared to its fresh counterpart.

Pasilla peppers have a unique flavor profile consisting of smoky, earthy, and fruity flavors often described as "raisin-like." We find their aroma to be quite fragrant and personally think they smell like prunes.

You'll find the chile pasilla flavoring all kinds of dishes from salsas and moles to soups.

Pasilla peppers are relatively mild in heat and measure in at 1,000-2,500 Scoville Heat Units (SHU) on the Scoville Scale.

The best comparison would be the jalapeño pepper, which averages about 5,000 SHU.

Pasilla chiles are filled with many vitamins and minerals like B2, B6, A, iron, and fiber. All contribute to increased brain function, energy production, eye health, and more.

There is one compound found in chiles, called capsaicin, that is particularly beneficial for a few reasons.

Capsaicin is responsible for the spiciness of pasilla peppers, but it has also been shown to promote heart health, reduce inflammation, and increase metabolism — just to name a few. 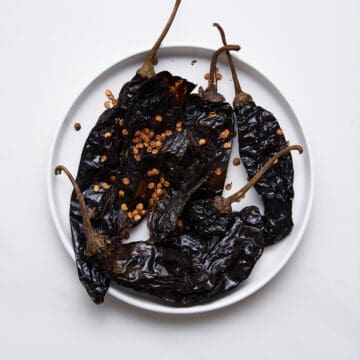 How to Rehydrate Pasilla Chiles

With so many tasty recipes utilizing pasilla peppers, we've narrowed down some of our favorites including:

Store pasilla chiles (or powder) in an airtight glass container to control moisture levels. You should also keep them in a cool, dark environment (like a cupboard) to keep their flavors lasting the longest.

If you're looking to cook more Mexican-inspired dishes, you really need to have pasilla peppers stocked in your pantry.

What to look for

Alternatively, extremely soft pasilla chiles may have been in contact with moisture, so they should also be avoided.

Although they are not as easy to find outside of Mexico as some other peppers (like ancho or guajillo), pasilla peppers can usually be found in larger grocery stores near the spice aisles.

If you're lucky enough to live by a Mexican market or store, pasilla peppers will most certainly be available there.

However, since we live in such a convenient day and age, you can also order pasilla chiles online and keep them stored well.

With a rather unique flavor profile, there are only a couple of good substitutions you can go for when trying to emulate the flavor of chile pasilla:

If you're interested in learning about more popular chiles used in Mexican cooking, check out our other detailed guides:

Why are my pasilla peppers bitter?

If your food comes out bitter after using pasilla peppers, it's likely because they were burned during toasting or the seeds were left in. In some cases, seeds can be very bitter when left in the chiles.

Can I make my own pasilla peppers?

Yes, you can make your own pasilla peppers. All you have to do is purchase chilaca peppers and dry them outside, with a dehydrator, or in the oven to make pasilla peppers.

Typically, the chile pasilla variety is not smoked. However, pasilla de Oaxaca are significantly hotter and are smoked during the drying process.