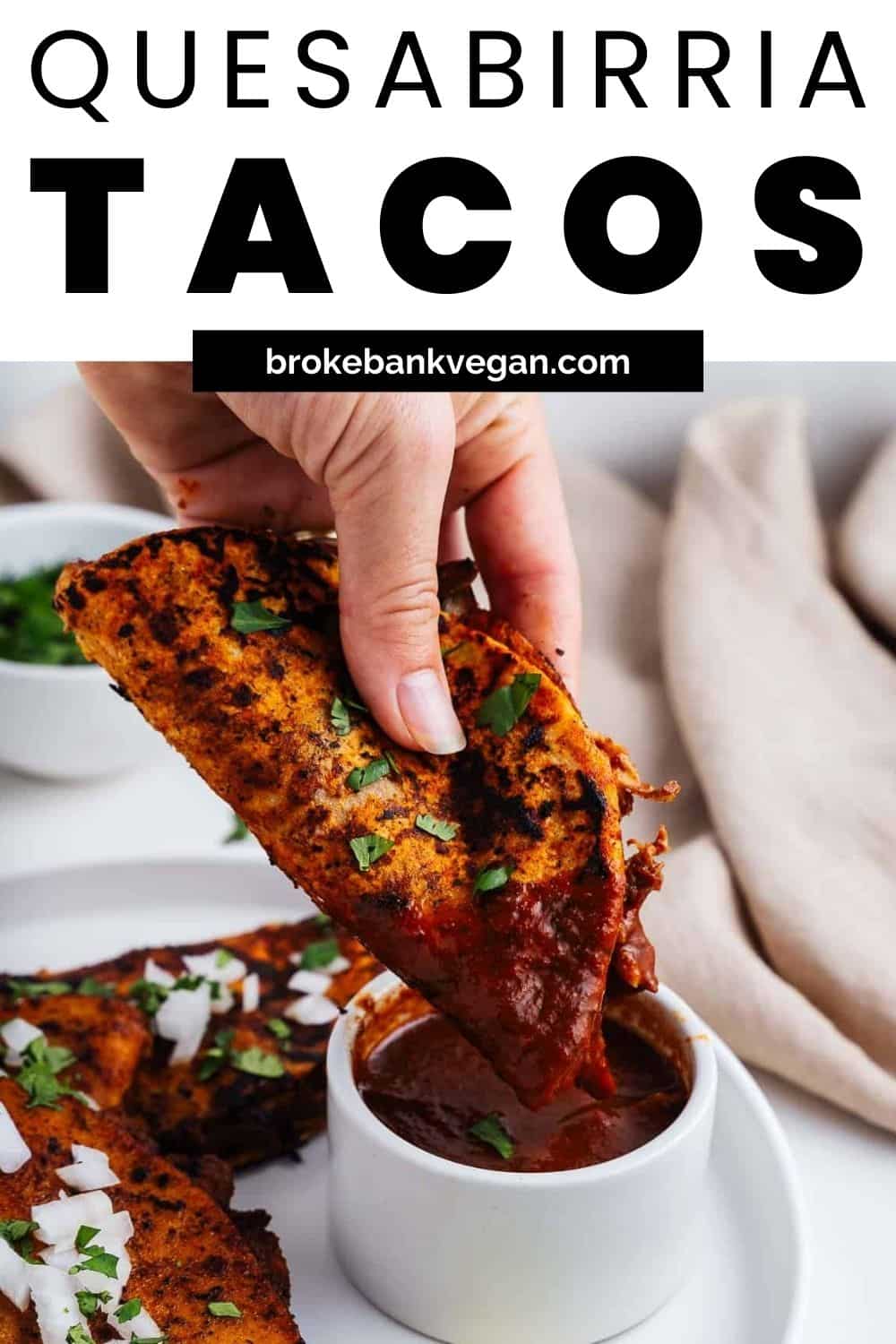 These easy vegan birria tacos (or quesabirria tacos) feature corn tortillas stuffed with shredded oyster mushrooms and melty plant-based cheese. Served with a side of rich consomé, this meal is saucy, crispy, and flavor-packed!

🌮 What are birria tacos?

Birria is a Mexican stew traditionally made with goat meat. It's typically marinated in a sauce of dried chiles, tomatoes, herbs, and spices, then slow-cooked until tender.

There are different (often overlapping) ways to serve birria. Some of the options include plain stew, birria tacos, or quesabirria tacos.

Birria tacos and quesabirria tacos are essentially the same, but one is served with cheese and the other without (guess which one is which).

The corn tortilla is dipped in consomé, then stuffed with meat mushrooms* and cheese before being crisped up on both sides. This dish combines birria, tacos, and quesadillas — all extremely delicious Mexican foods.

Popular garnishes to pair with vegan birria tacos are fresh white onions and cilantro, but you can use other veggies or sauces like guacamole, crema, or guajillo sauce.

The origins of birria began in the state of Jalisco, more specifically the town of Cocula. This stew originated sometime during the colonial era when goats were brought to the area. After their introduction, a few things happened:

Since then, birria is still a popular dish throughout Mexico (especially Jalisco). There are now many variations, including the infamous quesabirria tacos that have formed a whole new food category unto themselves.

In their traditional form, quesabirria tacos are not vegetarian or vegan-friendly. Here are a few ingredients to watch out for:

Dried chiles — Use a combination of guajillo, pasilla, ancho, and morita. If you don't have access to any dried chiles, use chipotles in adobo and chili powder.

Roma tomatoes — Adds tangy, juicy flavors. You can also use canned (diced or whole) tomatoes instead. Tomatoes are a major dietary source of lycopene, which is a powerful antioxidant.

Onion, garlic — A necessary component for any savory recipe. Use white or yellow onion.

Corn tortillas — Freshly made corn tortillas are our first choice, but you can also use store-bought to save on time.

Vegan cheese — Use a dairy-free mozzarella, Monterey Jack, or any other option that properly melts.

Step 1 — Stem and shake the seeds out of the dried chiles. Toast them in a skillet for 30-60 seconds, or until they are fragrant (this helps open up the flavors).

Step 2 — Once the chiles are toasted, add them to a pot of boiled water, cover them, and leave them to rehydrate.

Step 3 — In another pot, simmer the tomatoes, onions, and garlic cloves until softened.

Step 4 — Drain the chiles, then add them to a blender with the tomatoes, onion, garlic, apple cider vinegar, all of the spices (minus the bay leaves), and about one cup of vegetable broth.

Step 5 — Blend the mixture on high until it reaches a smooth consistency. Pour the sauce through a fine-mesh strainer into a large stockpot.

Step 6 — Add in the rest of the vegetable broth and bring everything to a simmer for about 40 minutes. You can adjust the broth consistency to your liking. If you prefer it thinner, add more vegetable broth a little at a time.

Step 7 — In the meantime, remove the bottom portion of the oyster mushrooms, then shred them with your hands. Season the mushrooms with oil, garlic powder, salt, and pepper.

Step 8 — With about 10-15 minutes left of simmering the consomé, heat a little oil in a large skillet over medium-high. Cook the shredded mushrooms in batches until golden brown.

Step 9 — Add all of the cooked mushrooms back into the skillet with a few cups of broth. Stir well, then cook them together for another few minutes.

Step 10 — Heat a little oil in another skillet over medium. Dip a corn tortilla in the pot of birria, then place it on the skillet. While it’s cooking, add a scoop of the mushroom mixture and a handful of shredded vegan cheese (optional).

Step 11 — Fold the tortilla over the fillings and cook it on each side until the outsides are crispy and the cheese is melted. Garnish with fresh white onions, chopped cilantro, limes, and a side of consomé. Happy eating!

If you have questions about making vegan birria tacos or quesabirria tacos, check out our FAQs or leave a comment down below!

🍹 What to serve with vegan birria tacos

Vegan birria tacos are best served hot off the skillet while they're crispy and the cheese is melted. Cool off between bites with some aguas frescas or cocktails:

Tip: The easiest (albeit messiest) way to eat vegan birria tacos is with your hands! Pick one up, dip it in broth, and dig in. If it's getting really messy, you can always use a fork and knife.

Quesabirria tacos taste best when they're hot and crispy (for obvious reasons), but birria itself actually stores quite well.

Fridge — The birria will keep in your fridge for up to 4-5 days in an airtight container. It's best to store the broth and mushrooms separately from the tortillas.

Freezer — If you make a large batch, you can freeze birria for up to 3-4 months in freezer-safe bags or containers.

Reheat — Thaw the birria in your fridge overnight. Then, heat it in a saucepan over medium-low for 5-10 minutes. If you are making quesabirria tacos, continue with the same steps as outlined in our recipe card.

Note: If you have fully-made vegan birria tacos, fry them on your stovetop for 3-5 minutes per side to heat them all the way through again.

Oven — The mushrooms also cook well in the oven, especially if you're looking to reduce your oil intake.

Roast — For smoky, complex flavors, pan-roast the onions, garlic, and tomatoes on a cast-iron skillet or comal.

Cheese — As long as it's dairy-free, try switching up the varieties of cheese you use. Just make sure it's meltable!

Use freshly dried chiles — The flavors are much better when you use chiles that have been recently dried. They should feel pliable and already be fragrant at the store.

Make the tortillas — This recipe tastes extra delicious when you make your own corn tortillas.

Toast the spices — For even more fragrant and intense flavors, toast the whole spices in this recipe.

Slow-cook — For a well-balanced broth, simmer it low and slow to bring the flavors together.

What can I use instead of dried chiles?

If you don't have access to the dried chiles mentioned in this recipe, try using canned chipotle peppers in adobo, more tomatoes, and ancho chile powder.

What type of tortilla is best for quesabirria tacos?

Corn tortillas are the most traditional and best option for quesabirria tacos. You can use white or blue corn tortillas.

Yes, vegan birria tacos are typically gluten-free and so is this recipe. Just make sure you use corn tortillas and not flour tortillas!

If you enjoyed these vegan birria tacos, be sure to check out some of our other top-rated tacos and quesadillas: 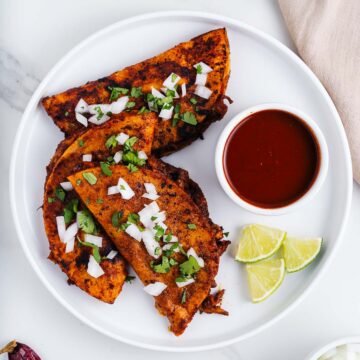