Try this ensalada de papa (or potato salad) full of buttery potatoes and crunchy vegetables covered in a creamy, dairy-free chipotle sauce. It's the perfect item to bring to your next potluck or gathering!

We don't know about you, but potato salad is one of our all-time favorite side dishes. When we walk by the taco stand right by our house, we're always a little bummed the ensalada de papa isn't vegan-friendly.

So, we made one at home with some delicious Mexican flavors to spice things up a little (literally).

What is ensalada de papa?

Ensalada de papa just translates to potato salad in English. We couldn't find too much differentiation between a Mexican potato salad and an American recipe.

Only a few ingredient tweaks are made based on the availability of foods local to the area.

The reason potato salad is one of our top picks is that it's so easy to make and even easier to customize to your preferences. It's one of those "use up everything in the fridge" recipes that taste good no matter what you throw in it.

Since Mexican crema, mayonnaise, and sometimes hardboiled eggs or ham are added to ensalada de papa, it's not typical to be plant-based.

However, if you use dairy-free crema and mayo and skip the ham and eggs, this recipe is definitely vegan and gluten-free.

It's hard to pinpoint the exact origin of ensalada de papa in Mexico, especially since it can be made in so many different ways.

The actual idea of potato salad is thought to have originated in Europe, spreading throughout the colonies and the rest of the world with many variations to be found.

In Mexico, there is evidence of wild potato crops that date back centuries. But, it wasn't until the 16th century that the Spanish brought cultivated species to the area.

Nowadays, potatoes are served as one of the main ingredients in various antojitos (snack foods). They work really well as a filling for all kinds of masa-based dishes like potato tacos, papas con chorizo, tamales, etc.

Although we enjoy eating this ensalada de papa on its own, it's the perfect companion to many great recipes including:

What are your favorite meals to serve with vegan potato salad? Let us know in the comments below!

Taste: to make potato salad, tender potatoes are a necessity. We use the white variety for a smooth, buttery, and slightly sweet flavor, but you can just as easily swap in red or yellow potatoes.

Health: these small, but might tubers pack some serious health benefits. In just one medium potato, there are over 4 grams of fiber and 5 grams of protein. While you can peel the skin if you prefer, that's where most of the important vitamins and minerals are!

Taste: this Mexican potato salad has a creamy, zesty, and smoky flavor thanks to crema, mayo, pickled jalapeños, and chipotles in adobo. Although you can omit the chipotle, we think it takes this sauce to another level.

Health: following a plant-based diet has had profound effects on our health, but don't take our word on it because there's literature to back it up! Using vegan mayo or crema made from cashews reduces saturated fat intake and replaces it with unsaturated fat. All of that basically means you'll have a reduced risk of heart disease! Sounds pretty great to us.

Taste: to add more flavors to this Mexican potato salad, we opted for extra crunchy vegetables. Red onion for bite, celery for earthy flavors, pickled jalapeños for spice, and green onion for freshness.

Health: no wonder why our parents always told us to eat our vegetables when we were younger — they are so dang good for you! Each different colour carries its own set of unique health benefits. For example, did you know red onions contain at least 25 different anthocyanins?

If you have questions about this vegan ensalada de papa recipe, don't forget to check out our FAQ section at the bottom of this post.

Step 1: roughly cube the potatoes, add them to a large pot, and cover them with cold water. Bring your taters to a boil, add a generous pinch of salt, then simmer them for around 10-12 minutes, or until tender when pierced with a fork.

Step 2: drain the potatoes, then spread them out on a baking sheet in a single layer. Toss them with vinegar and another pinch of salt for extra flavor. Let the potatoes stop steaming, then transfer them to your fridge to cool more.

Step 3: meanwhile, chop the celery, onions, and jalapeños, then add them to a large mixing bowl. Mix the vegan mayo, crema, pickled jalapeño juice, and minced chipotle peppers together in a small bowl.

Step 4: transfer the cooled potatoes into your bowl of veggies. Add in the sauce and stir to coat the salad evenly. Taste and season with salt and pepper to your preferences, then chill the salad for around an hour before serving. Happy eating!

This Mexican potato salad is great for meal prep and tastes even better after it's chilled in the fridge. Follow these storage instructions to make sure it stays fresh.

Vegan ensalada de papa will keep in the fridge for up to 5 days. We like to use glass containers to store our leftovers because they really lock in the flavors, but any airtight container will do the trick.

We'd like to share some tips and tricks we learned while experimenting with this vegan potato salad recipe:

If you are looking for a crowd-pleaser, this vegan potato salad is just the thing you need! It's:

If you try this ensalada de papa recipe, please rate it and leave us a comment below! Want to stay up-to-date with new recipes? Subscribe to our newsletter or connect with Broke Bank Vegan on social media. Happy eating! 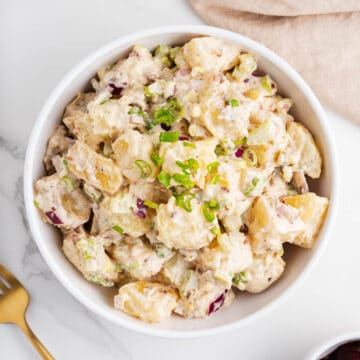 For more hearty recipe ideas, check out our:

What are the best potatoes to use for ensalada de papa?

The best potatoes to use are waxy varieties since they hold up well after cooking. Russet potatoes (or similar starchier ones) don't hold their shape as well in potato salad. But, it all depends on your preferences.

While potato salad is served globally, it's a dish you'll often see in Mexico too. We added elements of Mexican flavors to make this potato salad a little different from a typical American potato salad.

What can I use instead of crema?

If you don't have the ingredients to make vegan crema, replace it with equal parts mayonnaise or dairy-free sour cream.