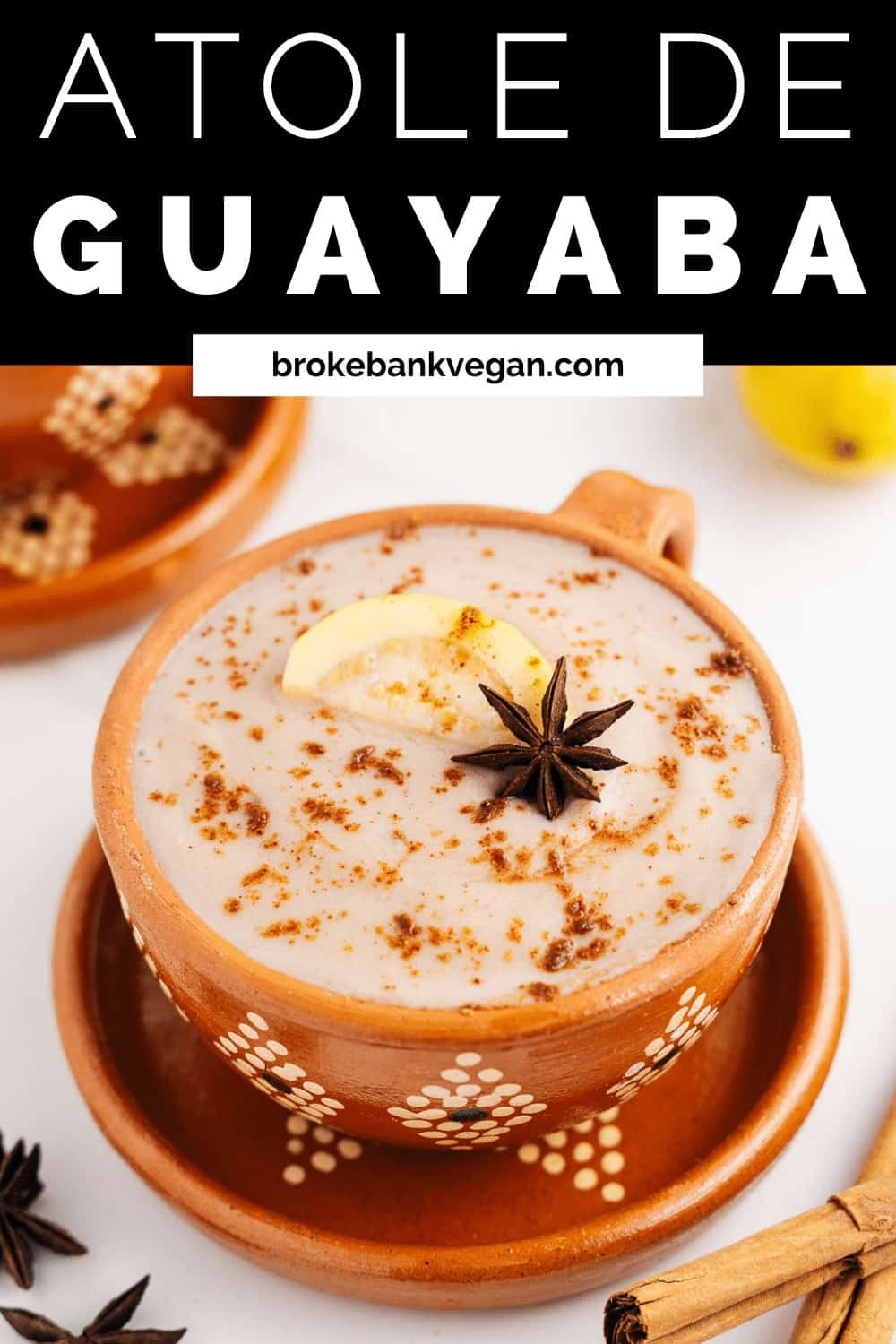 Start your morning off right with a rich, creamy, and fruity atole de guayaba. Enjoy the tropical flavors of guava mixed into this delicious vegan version.

You're going to love it!

With the tropical flavor and creamy texture of this atole, you'll be making this recipe on repeat! Not only is it super customizable, but it's a drink the whole family will love.

Although the exact history is rather challenging to track down, we know atole has been consumed for thousands of years by the Aztecs.

How do we know?

The word atole comes from the Nahuatl word atolli, which translates to "corn drink" and pretty much validates the theory of its creation during this time period.

We believe the drink was consumed with mashed corn (rather than a finely ground masa) and mixed with water and possibly other spices.

However, as the Aztec empire grew so did its modernization of tools, and a smoother corn consistency likely resulted.

This drink seems to have evolved throughout the centuries as alluded to by Hernán Cortés (A Spanish conquistador) in his Letters of Relations. He described atole as "highly energizing," but a flavor not enjoyed by Spaniards.

The recipe was eventually adapted to better suit their taste, so atole recipes of today are a fusion between Aztec and Spanish influence.

You may hear atole referred to by names like pinol or pinolillo in other Latin countries, but the end result is quite similar.

Atole is a warm drink usually consumed for breakfast, but it can be enjoyed at any time of the day.

Most recipes will include a mix of masa harina (sometimes cornstarch), water, and spices. Milk is often added to give a rich, sweet, and creamy element.

We are often asked about the difference between atole and champurrado, so let's set the record straight.

Atole is a corn-based drink that typically consists of masa, water, cinnamon, piloncillo, and vanilla. Ingredients may vary, but this is the general recipe.

Champurrado is simply an atole recipe with Mexican chocolate added in. Make sense?

Keep in mind there are lots of variations when it comes to Mexican hot chocolate, but that's for another post.

Traditionally, atole is vegan-friendly. However, many recipes call for dairy to make this drink more creamy and palatable.

We've added soy milk to replace the rich texture of cow's milk. If you follow this recipe, you'll be happy to know it's both vegan and gluten-free.

This creamy drink is often frothed with a special wooden whisk called a molinillo. By rolling it back and forth between your hands, it makes the atole light and airy.

If you're like most people and don't own one of these niche Mexican tools, just add your atole to a blender and mix on high for an extra foamy drink.

We enjoy ours hot off the stovetop, and we think this drink goes especially well with:

We hope you enjoy learning how to make atole de guayaba because we know you're going to love it!

What it is: this popular ingredient is the pinnacle of Mexican cuisine, and it's used in a ton of recipes (including corn tortillas). Although mistaken with corn flour, the two are not interchangeable. Masa harina is made from a special type of corn that's undergone a process called nixtamalization. This frees up vitamin B3, removes toxins, and improves the overall flavor.

Taste: to make a proper atole, don't skip masa harina! It has a slightly nutty and mild corn flavor that helps thicken this drink. It works especially well when mixed with guavas too.

Health: one of the most abundant vitamins found in masa is called niacin (you may also know it as vitamin B3). Niacin has been shown to not only lower bad cholesterol (LDL), but it's also demonstrated the ability to raise good cholesterol (HDL).

Where to buy: masa harina can be found in most large grocery stores in the Latin American or Mexican aisles. It will definitely be available at a local Mexican market if you live near one. If not, you can also purchase masa harina online.

For more information, check out our detailed guide on masa harina.

Taste: for sweet, tropical, and fruity flavors in this creamy atole recipe, we added guava (guayaba). This tiny golden fruit also provides a smooth and buttery consistency in every sip.

Health: this cool-looking berry is rich in antioxidants, fiber, vitamin C, and potassium. If you know us, we're huge advocates for heart health, and we know fiber and potassium are crucial in maintaining a strong heart.

Taste: to give this atole a silky smooth and creamy mouthfeel, we added our favorite plant milk to the pot — soy! We think soy milk has a fairly neutral flavor while still adding richness to the drink.

Health: soy milk offers a whole host of health benefits, including being a great source of omega-3 fatty acids. Soy milk is one of the best plant sources of this brain-healthy fat. Studies have shown omegas being linked to a reduction in Alzheimer's and dementia. And to that, we say... Salud!

Taste: this raw form of cane sugar is found in most Mexican kitchens because it's a staple in so many dishes. It carries a unique flavor profile and can replace other sugars in just about any recipe. You'll be left with a more robust flavor than brown sugar with hints of smokiness and molasses.

Health: since it lacks processing, piloncillo is a source of many vitamins and minerals like zinc, magnesium, iron, vitamin A, C, and E, just to name a few.

Where to buy: you can find piloncillo in most large grocery stores or in the Latin American aisles. It also goes by the name panela in other areas of the world. If you can't find it, you can easily buy piloncillo online.

If you have questions about this atole de guayaba recipe, don't forget to check out our FAQ section at the bottom of this post.

Step 1: bring the cinnamon stick, star anise, 1 cup of water, guava halves, and piloncillo to a low boil in a medium-large pot. Once boiling, lower the heat and simmer until the guavas are quite soft and the piloncillo has dissolved.

Step 2: take the cinnamon stick and star anise pod out, then add the guava mixture to a blender. Mix it on medium-high until smooth. Note: most of the seeds will still be intact. This is okay because you'll be straining them out.

Step 3: in the meantime, whisk masa harina and salt with a cup of hot water in a small bowl until no clumps remain. Set that aside for now.

Step 4: add the soy milk and vanilla extract to the same pot as you used for the guavas, and heat over medium-low. When you start to see little bubbles forming (not full-on boiling), pour the guava mixture through a mesh strainer directly over the pot and stir it.

Step 5: mix in the masa mixture while vigorously stirring to get rid of any clumps. Once everything is combined, turn the heat down to low for a little longer. Keep an eye on the mixture, and stir it frequently!

Step 6: serve your atole de guayaba on its own with a garnish of cinnamon, or alongside snacks like churros, buñuelos, etc. Happy drinking!

After the first sip, you'll soon be making big batches of atole de guayaba. Follow these storage instructions to keep it fresh.

This atole recipe will keep in the fridge for up to 3-4 days. Our preference is to store it in mason jars since glass won't transfer other flavors into the drink.

As your atole sits in the fridge, it will become thicker. To reheat, just transfer it to a pot on the stovetop over medium-low and whisk everything to incorporate all the ingredients again. You can also throw it in your blender.

Time to share our tips and tricks we learned while creating this creamy guava drink for you:

We love atole de guayaba for a warming drink in the morning, and we know you will too. It's:

If you try this guava atole recipe, please rate it and leave us a comment below! Want to stay up-to-date with new recipes? Subscribe to our newsletter or connect with Broke Bank Vegan on social media. Happy eating! 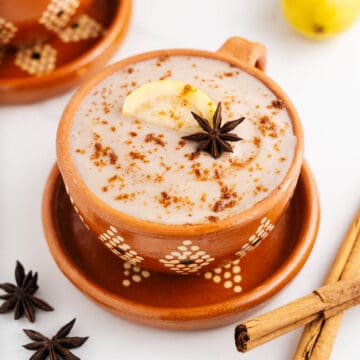 For more tasty drink ideas, check out our:

Containing natural plant-based foods that are minimally processed, we consider atole de guayaba healthy. Of course, that doesn't mean you should consume this drink in excess.

Can I use any plant milk?

While we are partial to soy milk in this recipe, you can absolutely use any plant milk for atole de guayaba. Some of our other favorites include cashew, coconut, oat, and almond.

Can I use any type of guava?

You can use any type of guava that's available to you locally. While we use Mexican cream guavas, you can use equal portions of other guava varieties in this recipe.