You might need to do a double-take after your first bite of this vegan chorizo. It's loaded with spicy and authentic Mexican flavors, but there is one key difference compared to the usual recipes — no meat!

We have a good feeling it's going to be your new favorite.

What do you end up with?

A meaty, umami, and spicy chorizo that pairs with so many dishes like huevos con chorizo, papas con chorizo, or hearty Mexican soups.

Chorizo originated on the Iberian Peninsula, which is now known as Spain and Portugal.

This style of meat comes in many different shapes, sizes, and flavors depending on the country you're in.

Although the Spaniards influenced much of Mexican cuisine as we know it today, Mexican chorizo couldn't be more different than its Spanish counterpart.

What makes it Mexican?

Before we go into the details of what Mexican chorizo is, let's first discuss what it is not — Spanish.

In general, Spanish chorizo is made from pork, but you can sometimes see it made with beef.

The main reason for its bright red hue is due to the use of paprika (both smoked and sweet). The other major players in Spanish chorizo are garlic, white wine, and various herbs.

The seasoned meat is then fermented and smoked. And lastly, the sausages are air-cured for weeks at a time. Talk about dedication.

For this reason, Spanish chorizo doesn't need to be cooked before eating it and you'll often see it served in slices.

Mexican chorizo comes fresh rather than cured. Plus, this fatty meat typically has more pork fat added to the recipe.

It's then mixed with spicy red chile peppers (which give it a deeper red hue), herbs and spices, and vinegar.

Because of the preparation, Mexican chorizo needs to be cooked before eating (think of it more like ground beef that isn't safe to eat raw). It's usually fried up on a cast-iron skillet and used in a variety of dishes.

Unfortunately, chorizo is not vegan since the main ingredient is pork. However, we're here to show you that you don't need to sacrifice taste when making this dish meat-free!

This recipe contains texturized vegetable protein, which has a taste and texture that will fool even the most avid meat eater.

We think it's important to make meatless recipes as accurate as possible for two reasons:

1. We want to retain the same texture and flavor to show people they don't need to eat meat (less killing = better planet).

2. If a recipe is labeled as "Mexican chorizo" but doesn't contain the traditional flavors, it does a disservice to an incredible culture and cuisine.

This is precisely why we take so much care in our research and development of the recipes we share with you!

Now that you know all about how to make vegan chorizo, it's time to start cooking!

Taste: also known as textured soy protein, TVP is derived from soy flour. It carries a mild bean flavor to begin with but soaks up marinades extremely well. It also provides an almost indistinguishable texture to ground meat, so you can see why it's the ideal candidate for this soyrizo recipe!

Health: TVP is a complete protein, meaning it contains all 9 essential amino acids. It's one of the best and cheapest meat replacements out there. In a ¼ cup (dry), there are 12 grams of protein, 4 grams of fiber, and 15% of your daily iron needs. Pretty impressive, right?

Where to buy: you can find TVP in the bulk section of most health food stores. It's also widely available online if you can't find any in person.

Taste: to give Mexican chorizo a distinct flavor profile, using ancho chiles is key! These peppers are known for their earthy, sweet, and "meaty" flavor. Plus, ancho chiles are one of the most widely available varieties, so you shouldn't have an issue finding some wherever you live!

Health: ancho chiles contain many powerful compounds, including capsaicin, vitamin A, and vitamin C. Capsaicin has been used for centuries in Ayurvedic medicine as a treatment for migraines, arthritis, high blood pressure, and even gingivitis. Damn!

Taste: as a close relative of onions, scallions, chives, leeks, and shallots, garlic is known for its pungent and powerful tasting notes (seriously, garlic breath is no joke).

Fun fact: did you know garlic can increase your sex drive? Yup, you heard that right! A compound found in garlic, called allicin, is responsible for improving cardiovascular health. Plus, it's also high in estrogen, which is beneficial to women's sexual health. The more you know!

Taste: unlike the Spanish version, there are a variety of spices found in Mexican chorizo. On top of red chiles and garlic, think cloves, cinnamon, cumin, coriander, or Mexican oregano. The combination of these seasonings really helps make this dish so complex and tasty.

Health: one of the best ways to improve your health is by including more herbs and spices in your cooking! Each ingredient comes with its own host of benefits. Take cloves for example — they help strengthen your immune system and prevent chronic disease thanks to antioxidants like vitamin C and eugenol.

If you have questions about this vegan chorizo recipe, don't forget to check out our FAQ section at the bottom of this post.

Step 1: de-stem and shake the seeds out of all the dried chiles. Add them to a pot of water and simmer for 10-15 minutes, or until the chiles are soft and pliable. Drain the water off and add them to a blender.

Step 2: toast the whole coriander seeds in a dry skillet until fragrant (this really helps bring out the flavors). Once toasted, add them to the blender along with cayenne, oregano, cumin, cloves, salt, pepper, soy sauce, apple cider vinegar, and water. Blend all that up!

Step 3: pour the chile mixture through a mesh strainer into a bowl (make sure to work it through with a spoon or spatula). This step isn't totally necessary if you have a high-speed blender, but it helps remove any unwanted chunks. Set the bowl aside for now.

Step 4: heat some coconut oil over medium-low in a small frying pan. Sauté the minced garlic for 1-2 minutes, then add in the dried TVP and stir to coat in the oil.

Whenever we're running low on this soyrizo recipe, we whip up another batch because it stores so well and goes with just about everything.

Once cooked, vegan chorizo can be kept in the fridge for up to 3-4 days. Just make sure to store it in an airtight container!

You can eat Mexican chorizo cold (like we do) or heat it up in a skillet over low-medium. Feel free to use the microwave in 10-15 second bursts, or until your soyrizo is warmed all the way through.

We love soyrizo as an addition to just about any meal! This plant-based protein is:

If you try this vegan chorizo recipe, please rate it and leave us a comment below! Want to stay up-to-date with new recipes? Subscribe to our newsletter or connect with Broke Bank Vegan on social media. Happy eating! 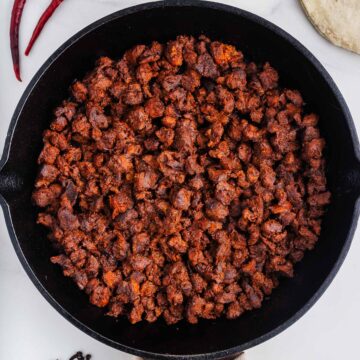 Mitch and Justine
This high-protein, 100% plant-based chorizo will leave you in disbelief. It's everything you want in Mexican chorizo, just without the meat! Enjoy this spicy, savoury, and delicious recipe as an addition to all your favorite dishes.
4.72 from 14 votes
Prevents your screen from going dark
Print Recipe Pin Recipe
Prep Time 5 mins
Cook Time 25 mins
Total Time 30 mins
Course How-to
Cuisine Gluten-Free, Mexican, Vegan
Servings 6 servings
Calories 228 kcal

For more tasty recipes, check out our:

What is vegan chorizo made of?

The plant-based version of Mexican chorizo can be made with many different ingredients such as walnuts, tofu, vegetable protein, tempeh, or mushrooms.

Chorizo is typically loaded with saturated animal fats, so we would deem this to be more on the "unhealthy" side. Using high-protein, low-fat soy protein makes this recipe more "healthy." But, as with anything, moderation is key.

What can I replace dried chile peppers with?

You can replace these chile peppers with a combination of paprika and ancho chile powder or paprika and cayenne.

Yes, this soyrizo recipe is gluten-free. Just make sure you are using tamari and not soy sauce.